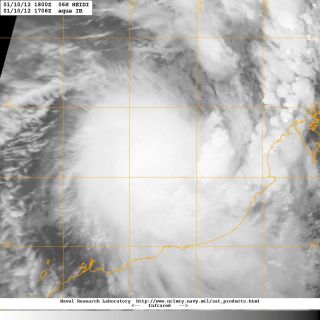 Tropical Storm Heidi has formed in the Southern Indian Ocean and is setting its sights on northwestern Australia.

Yesterday afternoon (Jan. 10), what had been System 92P strengthened into a tropical cyclone, the term for tropical storms and hurricanes in Indian Ocean basin. NASA's Aqua satellite captured an infrared image of Heidi that showed the storm developing. The storm was located about 170 miles (270 kilometers) north of Port Hedland, Australia.

The maximum winds sustained by the storm clocked in at 40 mph (64 kph), putting it just above the threshold for what would qualify as a tropical storm in the Atlantic Ocean basin.

The infrared image from the Aqua satellite showed that Heidi was a well-rounded shape, indicating the storm had good organization.

The most recent information from the Joint Typhoon Warning Center puts Heidi's winds at 63 mph (102 kph). It is expected to make landfall between Port Hedland and Port Samson in the state of Western Australia later today.