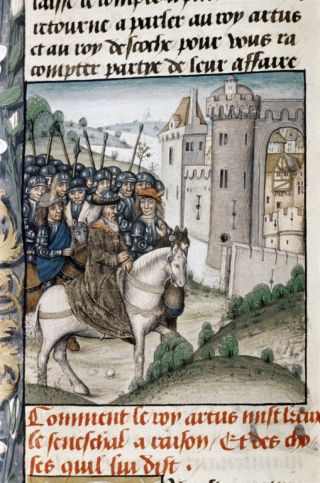 King Arthur and his knights return to Camelot after a tournament. This image is from a 14th-century manuscript.
(Image: © Public domain)

Camelot was a mythical castled city, said to be located in Great Britain, where King Arthur held court. It was the center of the Kingdom of Logres and in Arthurian legend would become the location of the round table that held 150 knights.

However, Monmouth — and other early Arthurian writers — made no mention of Camelot. The earliest known mention of Camelot comes briefly in a late 12th-century poem written by Chrétien de Troyes, and the earliest detailed description of Camelot would emerge during the 13th century in a series of French romances we call the Vulgate and Post-Vulgate cycles.

"In the thirteenth-century Vulgate Cycle, Camelot becomes the principal city of Arthur's realm and remains so in many, though certainly not all, later texts," writes a team of University of Rochester researchers working on the Camelot project.

Researcher Norris Lacy writes that the Vulgate Cycle was composed between 1215 and 1235 by an anonymous author or group of authors. "This cycle of five imposing romances can only be termed monumental, owing in equal measure to its enormous length, its complexity and literary value and influence," she writes in the preface to the five volume book "Lancelot-Grail: The Old French Arthurian Vulgate and Post-Vulgate in Translation" (Garland Publishing, 1993).

"The romances run to several thousand pages of text, and they offer many hundreds of characters and countless adventures intricately interlaced with one another." She also notes that the Post-Vulgate Cycle was written shortly afterward, again by an anonymous author.

In these cycles, Camelot would be discussed in detail. The text says, in translation, that it "was the city most full of adventures that ever was ..." Although located in Great Britain, its world was a place that included magicians, giants, dragons and, of course, many knights.

It's a mystery why Camelot is mentioned by Chrétien de Troyes and by anonymous 13th century French writers but not by earlier writers.

The story of Camelot starts with Joseph of Arimathea, who according to the Bible donated his tomb for the burial of Jesus. According to a Vulgate story, he came to Britain and then to Camelot, finding it to be an Islamic city.

"It was the richest of the Saracen cities in Great Britain, and it was so important that the pagan kings were crowned there, and its mosque was larger and taller than in any other city," part of the text reads (translation by Carol Chase).

Joseph succeeded in converting more than 1,000 of its inhabitants to Christianity. Its king, a leader named Agrestes, who is described as being the "cruelest man in the world," falsely converted. After Joseph leaves, Agrestes persecutes the Christians, eventually going completely mad and throwing himself into a fire.

Joseph then returns and sees that Camelot has converted to Christianity, "in the middle of the city he had the Church of St. Stephen the Martyr built," the text reads. This building would remain Camelot's largest church throughout the Vulgate cycles with additional, smaller, churches also being built.

Of course, Islam didn't even exist in the first century, and why the anonymous author(s) of the Vulgate cycle claimed that first century Camelot was an Islamic city is unclear.

Camelot was described as a city surrounded by forests and meadows with plenty of open space for knightly tournaments (which were held frequently). When a tournament was held, wooden reviewing stands for the ladies and maidens would be set up, one of which is mentioned as running for half a league (about 2.5 kilometers).

The text said that Camelot was a "rich and well provided town" but offers few details as to its layout or exact size. It was small enough that during a particularly lavish court so many barons and nobles came that "not a tenth of them could be lodged in the city of Camelot, and the others found shelter in the meadowland, which was wide and beautiful, in tents and pavilions," (translation by Rupert Pickens).

The church of St. Stephen apparently contained a large burial ground as numerous knights are mentioned as being interred there.

Indeed, Camelot saw more than its share of wars in the Vulgate stories. The city's defenses were formidable, surviving a war against the Saxons and another invasion in which Cornishmen aided the Saxons. "After the bridges were raised and the gates shut, they [a group of knights] climbed high on the walls to see whether or not the Saxons were coming to storm the city, but the Saxons did not have the will," reads a section of one story (translation by Rupert Pickens).

The text says that Arthur held court in a castle (or a tower as it's sometimes called) furnished with a main courtyard, bedrooms, areas for feasting and, apparently, the Round Table. The castle is close enough to a body of water so that in one story Arthur could see a boat coming into Camelot holding what turned out to be a dead maiden.

While tournaments are held frequently, the people of Camelot also enjoyed other, less-violent, forms of recreation. In one story, Lancelot gives King Arthur a fine chess set, knowing that Queen Guinevere is a good player.

According to one story, an inscription was found saying that the quest for the Holy Grail (a quest discussed at length in the Vulgate) must begin 453 years after the resurrection of Jesus. This gives a rough date for when King Arthur supposedly ruled Camelot.

The most famous aspect of Camelot is certainly its Round Table, and the Vulgate cycles discuss in detail how King Arthur came to possess it.

According to the text, it was a wedding gift from Guinevere's father, King Leodagan of Carmelide, after Arthur asked for her hand in marriage. At the time, there were already 100 knights (out of 150) who were members of the table. This led Arthur to ask the magician Merlin to choose the remaining members to bring it to full complement, emphasizing that each must be chivalrous.

When they were assembled, Merlin said that from "now on you must love one another and hold one another as dear as brothers, for from the love and sweetness of this table where you will be seated there will be born in your hearts such a great joy and friendship that you will leave your wives and children to be with one another and to spend your youth together," (translation by Martha Asher). The names of the knights were engraved on their chairs.

Merlin left one chair, called the "perilous" chair vacant, to be filled by a great knight (who would turn out to be Galahad, the son of Lancelot) at a time when the quest for the Holy Grail begins. Galahad is also responsible for pulling a sword from a stone that is meant to be pulled by the strongest knight in the world.

In the Vulgate cycles, there appear to be two sides to Camelot. On the surface, the leaders of the city are pious; the king attends mass regularly, and makes the sign of the cross when he hears bad news. Chivalry is essential, and vespers, a form of evening prayer, are held regularly. At times, battlefield enemies are even buried with honors.

Yet some of the most senior people in the city engage in destructive behavior. Some of the stories discuss how Queen Guinevere and Lancelot (the most powerful knight of the realm) engage in an affair. When King Arthur finds out about this, he soon finds himself in a ruinous war with Lancelot.

A knight name Bors tells Lancelot that "now it's going badly; now the affair is revealed; now a war will begin that will never end, and as much as the king has loved you until now – from his heart, more than any other man who was not of his kin – so much will he hate you from now on, once he knows truly the wrong you've done with his wife," (translation by Martha Asher).

In fact, at the end of this story it is not Lancelot who kills Arthur, but the king's own son, Mordred. Entrusted with the kingdom of Logres while Arthur pursues Lancelot, he takes it over, forcing Arthur to confront him in a final battle. This betrayal of his father is foreshadowed in the appearance of an image of a dragon at St. Stephen's church that is meant to represent Mordred.

In the final battle, the king attacks Mordred, "bearing down on him with all his force (he) struck him so hard that he ripped apart the links of Mordred's hauberk and thrust the steel of his lance through his body." Mordred repays his father in kind, when "Mordred saw the seriousness of his wound he realized that it would be fatal; and he struck King Arthur so powerfully on the helmet that nothing could protect his head, and the sword cut away part of his skull," (translations by Norris Lacy).

Mordred died and King Arthur would pass away soon afterward. "Thus did the father kill the son, and the son mortally wounded the father." The final battle also claimed the lives of most of the Knights of the Round Table.

The story of Camelot does not end quite yet. According to the Post-Vulgate Cycle this would occur sometime after the death of Arthur. A ruler named King Mark of Cornwall, whom Arthur (with help from Galahad) had once defeated in battle, takes his revenge by launching a final invasion of the Kingdom of Logres.

He reaches Camelot, whose people are now without the protection of the Knights of the Round Table. King Mark "went to Camelot, whose people were few in comparison to his own, but they were of great heart and reputation, and they said they would not let themselves be besieged. They all rode forth from the city and fought with the enemy, but they were so few that they were all soon killed, so that none escaped..." the text reads (translation by Martha Asher).

"King Mark entered the city and destroyed most of it," it continues. "When he came to Round Table and saw Galahad's place, he said, 'this was his place who in a single day destroyed me and the Saxons. For hatred of him I'll destroy the Round Table, his place first and after that all the others."

This was the end of Camelot and the Round Table. For the 13th-century readers this story may have provided a reason why Camelot did not still exist.

Camelot in later writings and culture

During the 15th century, the Arthurian legends, Camelot included, would be published in English thanks to the work of Sir Thomas Malory. His book, called "Morte d'Arthur," drew heavily on the French Vulgate cycles in addition to other Arthurian sources.

"Though little is known about Malory himself, the influence of his work has been considerable. Writers such as Alfred Tennyson, T.H. White, John Steinbeck, Mark Twain, and countless others have encountered the Arthurian world through some version of Malory's work and reinterpreted it in their own writing," writes researcher Kara McShane in an article republished on the website of the University of Rochester's Camelot Project.

Indeed, in the 20th century the idea of Camelot was powerful and, after the assassination of President John F. Kennedy, the name was used as a term used to describe the years of his presidency.

Perhaps one of the most beautiful post-medieval written works on Camelot comes from an 1833 poem by Alfred Tennyson called The Lady of Shalott. The start of the 1833 version reads: