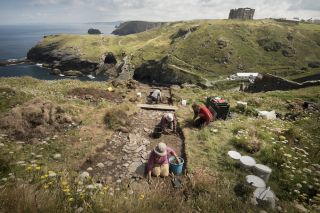 Archaeologists have completed the first stage of a major five-year study of the archaeology of the Tintagel headland in Cornwall, in the southwest of England. In English folklore, the site is thought to be the birthplace of King Arthur.
(Image: © Emily Whitfield-Wicks/English Heritage)

Archaeologists are back at the legendary birthplace of King Arthur.

Last summer, researchers discovered traces of early medieval life at Tintagel in Cornwall, on England's southwest coast, where the legendary British monarch was said to have been born.

Now, they've returned to the site for another round of digging, to further explore buried buildings dated from the fifth to the seventh centuries. [See Photos of the Archaeological Excavations at Tintagel]

The striking ruins of a 13th-century castle still stand on the Tintagel headland, but the site's history stretches back further, to the centuries after the end of Roman rule. It was during this time that King Arthur is said to have fought the invading Saxons. Tintagel is the birthplace of Arthur, according to a 12th-century writer named Geoffrey of Monmouth, who popularized legends about the king and the wizard Merlin. Still, there's no airtight historic evidence that Arthur existed.

Archaeologists have studied Tintagel occasionally since the 1930s, but there are parts of the site that remain unexplored. Last year, a team from English Heritage and the Cornwall Archaeological Unit embarked on a five-year investigation of the trading settlement or citadel that once existed during the Dark Ages on Tintagel island — really a peninsula connected by a small strip of land to the mainland.

In one artificially terraced area of the headland, the archaeologists uncovered thick stone walls, slate staircases, pavements and other remains of buildings that were likely part of a larger complex. The researchers plan to extend their trenches in this area to "get a good look at the scale and size of the buildings and find out exactly when they were built and how they were used," Jacky Nowakowski, project director at the Cornwall Archaeological Unit, said in a statement.

Nowakowski and her colleagues have released a new report that details the findings of last year's excavation. They described the wide range of locally made iron artifacts found at the site — brooches, belt buckles, dress hooks, knives and horseshoes — which could tell them about the everyday life of the people at early Tintagel.

Other items revealed that the settlement was connected to extensive trade networks. For instance, the archaeologists found fragments of glass vessels that might have come from France, Spain and Scandinavia, as well as broken bits of ceramic storage vessels that originated in Turkey and Cyprus, in the eastern Mediterranean.

"It is easy to assume that the fall of the Roman Empire threw Britain into obscurity," Win Scutt, a curator with English Heritage, said in the statement. "But here on [a] dramatic Cornish cliff top, they were making use of substantial stone buildings, using fine table wares from as far away as Turkey, drinking from decorated Spanish glassware, and feasting on pork, fish and oysters."

While archaeologists have evidence that this community was quite sophisticated and wealthy, they have not yet established a direct link with British royalty of that time. For now, the researchers think the site was most likely a secular stronghold of the rulers of Dumnonia (the kingdom that included Devon and Cornwall) during the Dark Ages.