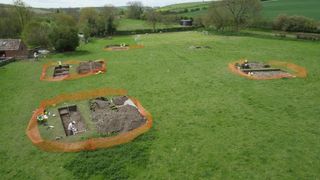 Archaeologists from Historic England and the Salisbury Museum conducted excavations at the villa site in Wiltshire.
(Image: © Past Landscapes Project/Aerial Filming Services)

One of Britain's best-preserved Roman-age villas was recently discovered beneath a home in southwest England.

Homeowner Luke Irwin, who lives in Wiltshire, wanted to run electrical cables from his house to an old barn, where his children could play table tennis. But in February, workmen digging a trench for the cables struck a hard surface about 18 inches (46 centimeters) underground.

"It was extraordinary," Irwin told Live Science. "I was lucky I was there that day." [See photos of the well-preserved Roman villa]

The workers had uncovered a detailed mosaic floor.

"The guy digging called out and we hurried over. You could immediately see the mosaic — the colors were so vivid, it was literally like the day it was laid," Irwin said. "There was a sense of disbelief — you are slightly shocked by that moment of the tangibility of history. History is often so distant and dry."

Irwin, who has a passion for history, knew that the mosaic was important evidence of something much older than the buildings on the property.

"Our house is made from two 17th-century laborers' cottages knocked together, so there was no way these guys would have put a mosaic in there," he said.

Irwin called local government officers to inspect the find, which led to an investigation by archaeologists at the Salisbury Museum, in Wiltshire, and Historic England, a government agency in the United Kingdom that preserves historic buildings, monuments and sites.

The researchers carried out a geophysical survey of the site and conducted an eight-day investigative dig around the spot where the mosaic floor was uncovered. What they found was astonishing: below Irwin's lawn lay the center of one of the largest Roman villas found in Britain, which was preserved underground and undisturbed for around 1,400 years.

"It’s clearly a very elaborate and very well-to-do residence," said David Roberts, an archaeologist with Historic England. "The finds, particularly the very fine mosaic that we've found, strongly suggest that it's been home to a very wealthy, aristocratic family."

Roberts said the villa seemed to have been occupied since the late second century or early third century, until late in the fourth century, a period that corresponds to Roman rule in Britain.

He added that the villa would have been the economic and social center of a local network of farming communities, at a time when Britain was an economic anchor for the Roman Empire in northwestern Europe. [History's 10 Most Overlooked Mysteries]

"In the later Roman Empire, Wiltshire is something of a bread basket for the northwest empire, and grain from the south of England is sent to Germany to feed the troops stationed there," Roberts told Live Science.

The investigative dig found other artifacts, including coins and "high-status" pottery, a Roman well and the stone coffin of a Roman child, which had been used as flower bed, he said.

For Irwin, the most moving items uncovered on his property were the personal traces left behind by people who lived there centuries ago, such as the remains of a meal of oysters that were brought to the villa from the coast, 45 miles (72 kilometers) away.

"There's something very powerful about the human items," Irwin said. "I found the oyster shells particularly evocative, because you're picking up something that was dropped 1,600 years ago — so it's literally from one hand to another."

Irwin, a designer whose work includes luxury rugs, has used the extraordinary find as inspiration for a new rug collection, some incorporating the mosaic patterns from the site.

"Everything is an adaption of something that’s gone before, and that makes it a living cultural item — it becomes like a bridge across centuries and across cultures," he said.

Roberts said some of the most interesting finds include pieces of pottery from the fifth century, after the official end of Roman rule but before the Saxon conquest of that part of Britain. At that time, the already-abandoned Roman villa was partially refitted by people who erected timber structures inside the ruined stone walls, he said.

"It's very rare to find well-preserved evidence from the fifth century, the post-Roman period," Roberts said. "In some ways, we have a lot more Roman villas than we have good fifth-century contexts."

These artifacts from the fifth century offer "such a rare window into that bit of the past that we don't often get a look at," he said.