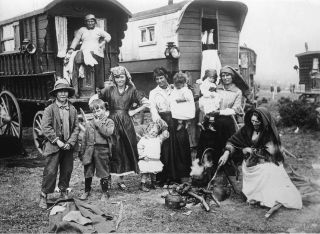 The graves of a Romani woman and baby who died as prisoners during World War II have been unearthed in the Czech Republic. The remains, found at a former Nazi concentration camp, show it was used to imprison Romani people. The graves are among those of more than 300 Romani victims thought to be at the site of the camp, near the village of Lety, about 40 miles (65 kilometers) southwest of Prague, the Czech capital.

The purpose of the Lety camp has long been a political issue in the modern Czech Republic. Some politicians, perhaps seeking to silence accusations of Czech collaboration with the wartime German occupiers, have alleged  it was never used as a concentration camp for Romanis — who call themselves Roma in Western and Central Europe and Sinti in Eastern Europe.

But the newly-discovered graves show conclusively that the Lety camp was used to imprison Romanis under Nazi racial laws — resulting in many of their deaths from disease or starvation during the Holocaust, Czech Radio reported.

"This is the first site which can be linked to the Romani Holocaust" said archaeologist Pavel Vařeka of the University of West Bohemia, who is leading the excavations for the Czech Republic's Museum of Romani Culture.

About 1,300 Romani people are thought to have been imprisoned at the camp at Lety during WWII. More than 327 Romanis died there, including 241 children, and about 500 were deported to the Auschwitz death camp in Poland, the Czech News Agency CTK reported.

Vařeka told Live Science that the graves were examined without removing the human remains they contained, to honor Romani cultural practices and avoid disturbing the dead.

"We had a deal with the [surviving] relatives that there wouldn't be any exhumations, so the remains will rest in peace where they were buried," he said.

Czechoslovakia was invaded by Nazi Germany in March 1939, which led in part to the outbreak of WWII in September that year.

The Czech part of the country was governed by Germany until 1945 as the Protectorate of Bohemia and Moravia, while Slovakia became a separate state under German control. Nazi racial laws enacted at Nuremburg in 1935 classified Romanis as "enemies of the race-based state," along with Jews and black people; as a result, tens of thousands of Romanis were forced into concentration camps in Nazi-occupied territories.

Historians estimate that around a quarter million people were killed in the Nazi genocide of Romanis — now called "Porajmos" in the Romani language, meaning "the Devouring."

The camp at Lety was built a few weeks before the German invasion as a "work camp" for criminals, but it was first used under the Nazis to imprison Romanis in late 1942.

More than 200 Romanis died from starvation and disease at the Lety camp before May 1943, when it was closed amid fears of a typhus outbreak, Vařeka said. The camp was later burned down.

Two major deportations of hundreds of Romani prisoners to the Nazi death camp at Auschwitz took place before that, he said.

Archaeological work started at the site in 2016, but Vařeka’s team was not allowed to access land occupied by an industrial pig farm, which was built over much of the former camp site in the 1970s.

That situation changed last year, when the Czech government purchased the farm, he said.

The two Romani graves — one of a young woman, aged less than 40 years, and one of a newborn or very young baby — were found in the last few weeks, during excavations of land once covered by the farm buildings, he said.

The graves are situated at what’s thought to be the southwest corner of the camp cemetery, and six other grave sites have been identified there by a non-invasive geophysical survey, he said.

The industrial farm on the site, a source of resentment among Czech Romani people, was now being dismantled, although its buildings have already destroyed much of archaeological value, he said.

The Museum of Romani Culture will now hold an architectural competition for new buildings at the site, to incorporate displays of the wartime camp and memorialize the area of the Romani cemetery.

The archaeologists are likely to investigate parts of the former camp that would be covered by the new buildings when the design was decided, Vařeka said.

The team would also continue to excavate the camp's waste heap — where several personal artifacts from prisoners had already been found, including beads, buttons from clothing and fragments of a mirror, he said.