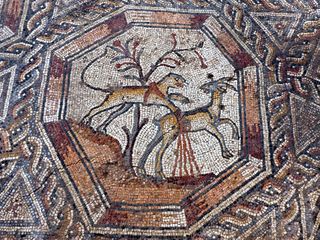 This section of the mosaic depicts a wild animal attacking its prey.
(Image: © Assaf Peretz, courtesy of the Israel Antiquities Authority)

A hungry lion taking down its prey and colorful fish leaping from the sea — these two nature-inspired scenes make up part of a large tile mosaic that was recently uncovered in Israel. The mosaic served as a courtyard floor in a wealthy household some 1,700 years ago, archaeologists say.

The ancient artwork was unearthed last year by archaeologists from the Israeli Antiquities Authority (IAA) who were preparing the site of a new visitors center in the municipality of Lod, a city located about 9 miles (14.5 kilometers) southeast of Tel Aviv. The modern-day neighborhood of Neve Yerek, where the mosaic was uncovered, was once home to wealthy residents with a taste for tiled floors, the researchers said.

"The villa we found was part of a neighborhood of affluent houses that stood here during the Roman and Byzantine periods. At that time Lod was called Diospolis and was the district capital, until it was replaced by Ramla after the Muslim conquest. The building was used for a very long time," Amir Gorzalczany, an excavation director with the IAA, said in a statement. [In Photos: 1,700-Year-Old Mosaic Once Adorned Israeli Courtyard]

The ancient Israeli residence was also home to another large mosaic, which was discovered by workers breaking ground on a new highway through Lod in 1996. That now-famous mosaic (parts of it have since been displayed in museums all over the world) is approximately 50 feet (15 meters) long and 27 feet (8 m) wide. Like the newly unearthed courtyard mosaic, the mosaic that once made up the villa's indoor floors features colorful images of animals, such as elephants, lions, giraffes and bulls.

This huge piece of artwork is now on display at the Cini Gallery in Venice, Italy, but it will return to the city of Lod in the near future, when construction of the municipality's new visitors center is complete. The newly unearthed mosaic will also be put on display, according to the IAA.

The courtyard mosaic, which measures 36 feet (11 m) across and stretches 42 feet (13 m) in length, was once the focal point of a large outdoor living space, located at the southern end of the ancient villa, according to IAA archaeologists. The courtyard was surrounded by covered walkways that had ceilings supported by columns. Some of the walls enclosing the courtyard still show traces of the colorful frescoes, or paintings made on wet plaster, that once adorned the residence.

Like the large mosaic in the villa's living room, the courtyard mosaic doesn't feature any human forms, nor is there any religious imagery that could help archaeologists determine the faith of the people who once walked along the colorful floors. All of the scenes depicted in the courtyard tiles depict hunting and hunted animals, as well as various fish, flowers and vases.

"The quality of the images portrayed in the mosaic indicates a highly developed artistic ability," Gorzalczany said.

The IAA is inviting the public to have a look at the newly uncovered mosaic before its full restoration. The mosaic is located at Ha-Halutz Street in Lod. But those who can't make the trip can view images of the mosaic online. Images of the larger living-room mosaic are also available on the Lod Mosaic website.