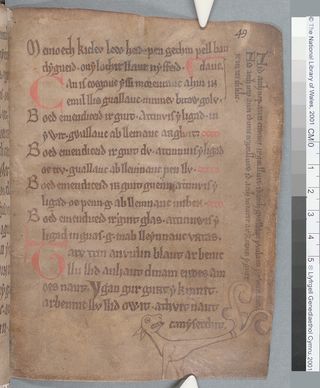 A page (49r) of "The Black Book of Carmarthen" showing the stylized drawing of a dog and text in the margins.
(Image: © National Library of Wales)

Ghostly faces and lines of verse previously invisible to the naked eye have been uncovered in the oldest surviving medieval manuscript written entirely in Welsh.

"The Black Book of Carmarthen," dating to 1250, contains texts from the ninth through 12th centuries, including some of the earliest references to Arthur and Merlin.

"It's easy to think we know all we can know about a manuscript like the 'Black Book,' but to see these ghosts from the past brought back to life in front of our eyes has been incredibly exciting," Myriah Williams, a doctoral student at the University of Cambridge, said in a statement. "The drawings and verse that we're in the process of recovering demonstrate the value of giving these books another look." [See Images of the Black Book and Ghostly Faces]

In 1904, Sir John Williams, the founder of the National Library of Wales, bought the book, which measures 6.7 by 5 inches (17 by 12.5 centimeters). Only recently did Myriah Williams and Paul Russell, a professor at Cambridge's department of Anglo-Saxon, Norse and Celtic (ASNC), examine the pages of the book.

"The margins of manuscripts often contain medieval and early modern reactions to the text, and these can cast light on what our ancestors thought about what they were reading," Williams explained. "The 'Black Book' was particularly heavily annotated before the end of the 16th century."

Williams and Russell said they think a man named Jaspar Gryffyth, a 16th-century owner of the book who copied his name in Hebrew onto the book, likely erased such "reactions." These verses and doodles would've been added to the manuscript over centuries as it was passed from one owner to another. "He fits the time frame for the erasures, which we know would have been in the late 16th century, but we can only speculate that he might have been the one to take it upon himself to 'cleanse' the manuscript," Williams told Live Science in an email.

Using UV light and photo-editing software, Williams and Russell revealed glimpses of some of the erased doodles. For instance, page fol. 39v of the newly visible work includes ghostly faces and a line of text accompanying them, which date to the 14th or 15th century, Williams said. On the following page, fol. 40v, a full verse, possibly dating to the 13th century, came to light. "There is one more drawing so far that we are still working on," Williams said.

"What we have discovered may only be the tip of the iceberg in terms of what can be discovered as imaging techniques are enhanced," Russell said in the statement. "The manuscript is extremely valuable and incredibly important — yet there may still be so much we don't know about it." [10 Words in Medieval Voynich Manuscript Decoded]

Scientists think a single scribe collected and recorded the book's contents, ranging from religious verse to different types of poetry, over that individual's lifetime. The text in the 54-page book changes from large script written on alternating ruled lines of vellum to later pages with much smaller lettering and lines that are much closer together.

Williams, who studied the manuscript for her doctoral dissertation, has some favorite pages and verses, she said. Her favorite page, fol. 49r, holds various styles and layouts, along with an example of the scribe's penchant for writing on the book's margins. "It also contains a fantastic stylized image of a dog, possibly a greyhound," Williams said, adding that the book's scribe likely made the drawing. Two verses were also added, likely by this scribe, on the right margin of 49r.

"I am also fond of the central poem of this page, a short series of verses cursing a goose for pulling out the eye of Gwallawg, the figure after whom the poem has been named by scholars," Williams said.

In another entry, the legendary hero Arthur describes the virtues of his men in order to gain entrance to a court, the researchers noted. Two prophetic poems are attributed to the famed Merlin, as well, with the first poem of the book a conversation between him and Welsh poet Taliesin.

And in a text entitled "Englynion y Beddau" (or "Stanzas of the Graves"), a narrator claims to know where some 80 warriors are buried.

Williams said she hopes to continue to improve the reading of the newly revealed work on page fol. 40v and to learn more about the scribe's process of collecting works for the book. "Furthermore, I hope that I can use the information that we have gained from the margins and gaps to continue to develop a picture of the life of the 'Black Book' after the 'Black Book' scribe had completed his work," Williams said.