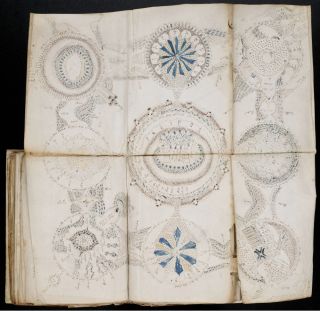 A researcher claims he's decoded 10 possible words in the famously unreadable Voynich manuscript, which has eluded interpretation for a century.

The book's 250 vellum pages are filled with writings in an unknown alphabet and elaborate drawings depicting a range of subjects from female nudes to medicinal herbs to Zodiac symbols. The medieval text was discovered by an antique book dealer in 1912, and it has been rather stingy in giving up its secrets ever since.

Now Stephen Bax, a professor of applied linguistics at the University of Bedfordshire in England, says he's deciphered 14 characters of the script and can read a handful of items in the Voynich text, such as the words for coriander, hellebore and juniper next to drawings of the plants. He says he's also picked out the word for Taurus written beside an illustration of the Pleiades, a star cluster in the constellation Taurus. [Voynich Manuscript: Images of the Unreadable Medieval Book]

"I hit on the idea of identifying proper names in the text, following historic approaches which successfully deciphered Egyptian hieroglyphs and other mystery scripts, and I then used those names to work out part of the script," Bax said in a statement.

"The manuscript has a lot of illustrations of stars and plants," Bax added. "I was able to identify some of these, with their names, by looking at mediaeval herbal manuscripts in Arabic and other languages, and I then made a start on a decoding, with some exciting results."

The Voynich manuscipt now sits in a rare books library at Yale University. Carbon dating proved that it dates back to the 15th century, and researchers believe it was written in Central Europe. While some scholars have written it off as a Renaissance-era hoax full of nonsense text, others say the pattern of the letters and words suggest the book was written in a real language or at least an invented cipher. A recent statistical study published in the journal PLOS ONE found that "Voynichese" adheres to linguistic rules.

Bax notes that the manuscript is still a long way from being understood, and that he is coming forward with what he's found thus far in the hopes that other linguists will work with him to crack the code. For now, he thinks the book is "probably a treatise on nature, perhaps in a Near Eastern or Asian language."