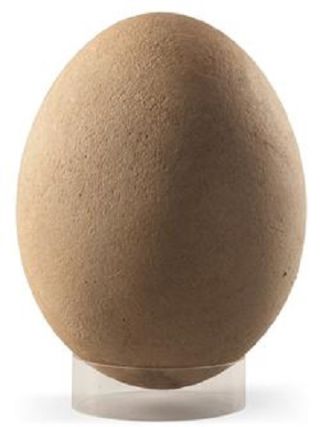 Traces of two awkward birds that have become emblems of extinction are headed for the auction block next month.

The auction house Christie's announced this week that it's selling a femur bone fragment of a dodo bird and a massive sub-fossilized elephant bird egg that's 100 times the size of a chicken egg.

Elephant birds were flightless creatures that stood 10 feet (3 meters) tall and lived on the island of Madagascar until they were driven to extinction by the 18th century, possibly due to factors like disease introduced by settlers or humans' unsustainable appetite for their eggs.

Their eggs indeed would have been big enough to feed a family, or several; the complete one up for auction measures 9 inches (21 centimeters) in diameter and 12 inches (30 cm) in height. It's expected to sell for up to $45,000.

The piece of bone up for sale comes from another clumsy flightless bird, the dodo, which vanished from a tiny island east of Madagascar called Mauritius by the late 17th century, less than a hundred years after its discovery.

According to Christie's, the femur bone was "almost certainly" excavated in 1865 in a coastal marsh on Mauritius called Mare aux Songes during a dig by George Clark (1807-1873), a British natural history enthusiast.

Zoologist Julian Hume of the Natural History Museum in London said this dodo bone fragment has limited value to science since it's one of many hundreds that have been collected from Mare aux Songes, and the osteology of the bird is already well known. But scientists who study the dodo's former stomping grounds might be worried about the buzz, especially if the bone bit goes for up to $22,000, as Christie's expects.

"The big concern is that if it sells for a lot of money, there may be a big increase in thefts from institutional collections or attempts to rob fossil localities like the Mare aux Songes for profit," Hume told LiveScience. "This would result in severe damage to the site and reduce the chances of obtaining any more information about the original fauna and flora of Mauritius."

A fossil-looting frenzy at the site would not be unprecedented.

"Ironically, this is exactly what happened back in the mid-1860s when the Mare aux Songes was first discovered," Hume added. "In 1866, Richard Owen, founder of the Natural History Museum in London, arranged the purchase of 100 bones for the princely sum of £100. This set off a free for all, and within a few years the original site was completely depleted of fossil bone material."

The auction will take place in London on April 24.