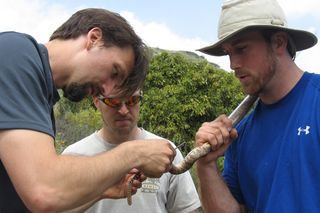 There are more than 3,000 species of snakes in the world and there is at least one type of snake on every continent except Antarctica. While the snake has a bad rap as a pest, snakes can often be quite helpful and even a fun pet.

With so many different species, there are snakes of many different sizes. The world's smallest snake, according to National Geographic, is the thread snake, which grows to only about 3.9 inches (10 centimeters) long. It looks much like an earthworm. The largest snake, the reticulated python, can grow to a whopping 30 feet (9 meters). The largest snake fossil ever discovered is called the Titanoboa. This creature lived 60 million years ago and would have been 50 feet (15 meters) long. [Image Gallery: 25 Amazing Ancient Beasts]

It is a common misconception that snakes build nests for their eggs. Only one species of snake, the king cobra, will build a nest for its young. Not all snakes lay eggs, either. About 70 percent of snakes lay eggs. These types of snakes are called oviparous.

The other 30 percent give birth to live young, much like mammals. This is because some climates are too cold for eggs to develop and hatch, so snakes living in colder climates do not lay eggs.

What do snakes eat?

Snakes are carnivores. This means that they only eat meat. Snakes are often seen as pests, but they actually can help keep pests at bay by eating rodents.

Many people think that all snakes kill their prey by biting it and injecting the prey with poison. This isn't true. Cobras, vipers and other related species are the only snakes that use venom to hunt.

Most snakes simply swallow their prey whole. Large snakes, such as the python, will strangle their prey to death and then swallow it whole. Snakes can eat other animals 75 to 100 percent bigger than their own size, according to National Geographic. They have been known to eat animals such as crocodiles and cows. To fit the large prey into their mouth, the snake's jaw will unhinge.

Once the animal is inside, the snake's body releases enzymes to break the food down into useable energy. Snakes don't need to eat as often as other animals because they have a very slow metabolism rate. King cobras, for example, can live for months without food.

Sometimes, though, eating a live animal can result in disaster. Snakes have been known to explode after eating a living animal, though it is not known why.

Where do snakes live?

Snakes live in almost every corner of the world. They are found in forests, deserts, swamps and grasslands. Many call underground burrows or the spaces under rocks home. Some snakes, like the cottonmouth water moccasin of North America live in water part of the time.

Though they are found all over the world, snakes do not, however, like the cold. This is because they are cold blooded or ectothermic. This means that they don't have the means to regulate their body temperature like warm blooded creatures. If it is cold outside, then the snake will be cold, too, since their bodies do not use energy to create heat to warm them. When it is cold, many snakes hibernate in tunnels underground. Others seek warmer areas, such as inside humans' homes.

According to the Integrated Taxonomic Information System (ITIS):

The rarest and most endangered snake is the St. Lucia racer. It is believed that there are 18 to 100 of these snakes left in existence. Other snakes, such as the Amami Takachiho and the Adelophis copei are considered vulnerable by the International Union for Conservation of Nature and Natural Resources since their populations are decreasing.

Snakes don't smell with their noses like humans. They have a forked or split tongue that they use to smell and taste chemical compositions in the air.

Snakes don't have eyelids or ears, either, and their eyes don't move. To hear they feel vibrations through the ground.

Humans' skin flakes off a little at a time, but snakes shed their entire skin nearly three times a year. This is called molting.

Snakes aren't slimy. Their scales are smooth and dry. Corn snakes use their scales as climbing equipment. They can angle the scales so that it digs into bark, allowing them to climb trees.

The paradise tree-snake of Southeast Asia can fly. It swings its body through the air and then flattens into a C-shape to catch the airflow. If it flips its body back and forth it can change directions as it falls.