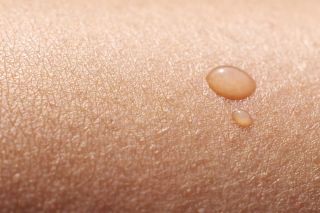 The majority of skin is water-proof because of keratin, a fibrous protein.
(Image: © PanicAttack | Shutterstock)

Skin is more than a fleshy surface for pimples, tattoos and wrinkles. Skin is the body's largest organ, and along with hair, nails, glands and nerves, is part of the integumentary system, according to Oregon State University. This system acts as a protective barrier between the outside and the inside of the body.

In adults, skin accounts for about 16 percent of total body weight and covers a surface area of approximately 22 square feet (2 square meters).

There are different thicknesses and textures of skin on different parts of the body. For example, skin is paper-thin underneath the eyes, but is thick on the soles of the feet and palms of the hand, according to the Johns Hopkins Medicine Health Library.

Human skin is composed of three layers of tissue: the epidermis, dermis and hypodermis, according to the Cleveland Clinic.

The epidermis is the top, visible layer of skin and it's constantly being renewed as dead skin cells are shed on a daily basis. The main functions of the epidermis include:

The dermis is the middle layer of skin, found underneath the epidermis. It is the thickest layer of skin and contains nerves and blood vessels. It is also home to the sweat glands, oil glands and hair follicles. The dermis gives skin its flexibility and strength, according to the Johns Hopkins Medicine Health Library. It is made up mostly of a protein called collagen that makes skin stretchy and strong.

According to the National Library of Medicine, the roles of the dermis include:

The hypodermis — also called subcutaneous fat — is the deepest layer of skin. This layer is made up mostly of fatty tissue, which helps to insulate the body from heat and cold. The hypodermis also serves as an energy storage area for fat. This fat provides padding to cushion internal organs as well as muscle and bones, and protects the body from injuries, according to the Johns Hopkins Medicine Health Library.

Dermatologists are physicians who specialize in treating diseases, disorders and injuries of the skin, hair and nails. They treat common conditions such as acne and warts; chronic skin conditions such as eczema and psoriasis; and more serious diseases like skin cancer, according to the American Academy of Dermatology (AAD).

Warts are benign (noncancerous) growths on the skin caused by the human papillomavirus (HPV), according to the AAD. They often occur on the hands and soles. Sometimes, tiny black dots will be visible in a wart.

"These are blocked blood vessels, which are a common occurrence with a papilloma viral infection," said Dr. Charles E. Crutchfield, a clinical professor of dermatology at the University of Minnesota Medical School, and medical director of Crutchfield Dermatology.

The best treatment for warts is to cause a mild irritation of these skin growths — usually by freezing them, applying a chemical such as salicylic acid or using lasers — so the immune system can recognize the viral infection and get rid of it.

Moles are another type of common growth on the skin. They're most often brown or black, but some can be red or skin-colored, and they may appear flat or raised. If a mole starts changing in size, color or shape, or if it bleeds and doesn't heal on its own in three weeks, it should be evaluated to make sure it's not turning into skin cancer, Crutchfield said.

Acne, a disorder of the hair and oil glands, is among the most common skin conditions treated by dermatologists, Crutchfield told Live Science.

Acne occurs when hair follicles become plugged with oil and dead skin cells, according to the Mayo Clinic. The condition presents itself as red bumps and pimples on the face, chest and back, Crutchfield said. Treatments for acne include vitamin A products (retinols prevent plugging of hair follicles), salicylic acid (to unplug pores), benzoyl peroxides (to decrease bacteria) and antibiotics (to reduce inflammation).

Eczema looks like patches of red, itchy, bumpy skin, and the most common type is known as atopic dermatitis. The condition can occur anywhere on the skin. Sometimes, it flares up on its own, and at other times, it is caused by a specific trigger, such as a skin irritant like poison ivy, or exposure to an allergen, according to Crutchfield.

Eczema is best treated with topical anti-inflammatory creams and ointments, which can reduce itching and redness. For mild symptoms, over-the-counter medications work well, but a prescription-strength cortisone product may be needed for more severe cases.

Skin cancer is an abnormal growth of skin cells, and the most common type is basal cell carcinoma, Crutchfield said. More than 4 million cases of basal cell carcinoma are diagnosed in the United States each year, according to the Skin Cancer Foundation. This type of cancer is skin colored, pink or has a slight pearly white color to it, and usually appears on sun-exposed areas of the face, ears or neck, according to the Mayo Clinic. It rarely spreads to other parts of the body, but it can be very problematic if it's not treated, Crutchfield cautioned.

The second most common type of skin cancer is squamous cell carcinoma. It may appear as a pink or white bump, a rough, scaly patch or a sore that won't heal, according to the AAD.

The most serious skin cancer is melanoma, which looks like a dark, changing, bleeding skin spot, Crutchfield said. This cancer begins in the skin's pigment-producing cells, and although it is the rarest form of skin cancer, it causes the majority of skin cancer deaths.

This article was updated on Oct. 22, 2018 by Live Science Contributor, Cari Nierenberg.