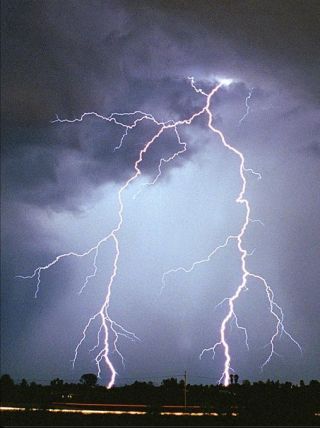 We can all stop arguing about whether the climate is changing. Evidence is overwhelming, from shrinking glaciers to melting polar ice caps and seas rising at twice the rate of the pre-industrial era. Animals are changing migration and mating patterns; in the North, 125 lakes disappeared; river ice is melting sooner in spring. This year is expected to be the hottest, stormiest and driest on record. The big remaining question is how much of the trend is natural (scientists admitted they know little about the Sun's role!) and how much is exacerbated by greenhouse gas emissions. Meanwhile, a host of studies made dire predictions about the inevitability of rising temperatures and swamped coastlines over the next century. Nasty side effects were predicted: more intense rainstorms; worse droughts; stronger hurricanes; increased allergies; ice-free arctic summers; and economic costs. A couple novel solutions were proposed: altering airline flights and lofting a ring of miniature satellites to shade the equator. Tempers rose in 2005, too, with the year closing on a low note from the perspective of more than 150 nations who pledged to do something about the problem, without the support of the United States or China.

A changing climate can alter the types and extent of plants in a region, scientists have been telling us. And now the bad news: The altered vegetation can, in turn, can make bad weather worse, a new study suggests.

The results are not clear-cut, however. While urban heat waves might get worse, other regions could experience less severe climate problems as trees disappear or the biology otherwise is altered.

Diffenbaugh says he's not making a prediction, just pointing out that things are more complex than many studies suggest.

"Earth's climate is all about relationships, and this study shows that ground cover plays a significant part in determining changes in climate extremes," Diffenbaugh said. "We are accustomed to hearing that greenhouse gases affect climate, but they are not the only factor we should consider. Our climate models also must incorporate the effect of vegetation if they are to capture the full scope of reality."

The study is detailed in this week's issue of the journal Geophysical Research Letters.

"People have suspected for some time that the greenhouse effect can change how often extreme events occur and how severe they are," he said. "We also know that climate change will affect what vegetation grows where and that those vegetation changes can feed back to further change the mean climate state. But this is the first insight we've had into whether those vegetation changes will also change the frequency and magnitude of extreme temperature and precipitation events, such as droughts and severe storms."

The model takes into account estimated changes in carbon dioxide since before the Industrial Revolution, and prediction of how much more the mix might increase, based on leading projections. Diffenbaugh and his colleagues then factored in the effect of vegetation, not well modeled in previous studies of this kind.

"What the comparison suggests is that in some places, such as coastal Oregon, greenhouse gases would be responsible for nearly all of the changes," Diffenbaugh said. "But in central California or the Great Basin, vegetation would be a far more significant factor in regulating the changes."

Diffenbaugh said that whether vegetation feedbacks make for more or fewer extreme events depends on the region.

"In the high Sierra Nevada, for example, people have often theorized that as the globe warms, evergreen forests will migrate to higher altitudes and be lost as they hit the mountaintops," he said. "We certainly see this warming and the predicted forest loss. But we also see that as the forests disappear, the higher elevations may not experience as much extreme warmth as expected because environmental feedbacks the new vegetation generates may mitigate this net warming."

In other more populous places, however, the effect could be the exact opposite.

"In central California, vegetation changes could even further increase the maximum temperatures over and above what the carbon dioxide will do on its own," Diffenbaugh said. "The model suggests that as the vegetation there responds to the greenhouse effect, heat waves will be longer, more frequent and more intense."

Other studies have shown that already, urban areas experience more intense temperatures in a heat wave owing to their lack of vegetation and sunlight-absorbing surfaces.

Droughts and heat waves are by far the deadliest weather-related disasters in the United States.

Diffenbaugh stresses that further refinement of his method is needed.

"This is the first time anyone has tried to understand these particular relationships, and though we can see they exist, our vision is still blurry," he said. "I put together the experiment in order to better understand how the Earth works, and it has been successful on that level. But the results should not be taken as a prediction of the future. I would characterize them as a first approximation of how two important components of the climate system can interact.