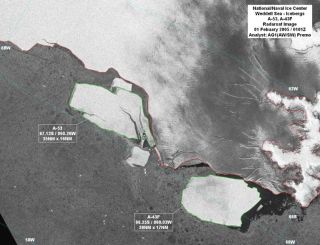 After a fresh analysis, scientists today warned again that global warming is threatening the stability of fragile glacier systems in the Antarctic and could lead to sea level increases worldwide.

The Antarctic region where an ice shelf known as Larsen B is found is warming faster than any other place on the planet, said Eugene Domack, a geology professor at Hamilton College.

This regional warming is disrupting natural cycles in the ebb and flow of the glacier systems that have been occurring for thousands of years.

"Which then says, okay, if this is unprecedented, maybe this is [human-caused] warming rather than some natural cycle," Domack told LiveScience. "Overall, this seems to fit the pattern that we would predict from global warming."

Domack is the lead author of a study published in the Aug. 4 issue of the journal Nature detailing the finding, which is based on ice core samples taken from the Antarctic region.

The Larsen B ice shelf has been thinning at a rate of tens of meters over thousands of years due to melting from its underside, a natural process known as undermelt. But the researchers' findings suggest that it is the surface melt caused by regional warming that finally caused it to collapse in the spring of 2002.

Larsen B has continued to fall apart in a series of breakups.

Melting ice from an ice shelf set adrift is not that big a deal, Domack said. The real concern is what happens to melting ice water from land glaciers feeding into those ice shelves.

While intact, the ice shelves act as a reservoir for the land glacier water and a barrier that prevents that water from flowing into the sea.

Remove the ice shelf, and the barrier is gone, and water from the land glacier freely flow into the ocean, raising sea levels.

Domack compared the ice shelves to buoy lines in a pool, and the melting waters from terrestrial glaciers to a raft.

"These glaciers are small, so the total sea level changes are small," Domack said about the Larsen ice shelves. But the same dynamic will apply to larger ice shelf systems as well.

"If they go, larger land-ice systems that feed into them will surge and accelerate," Domack said. "And there, the changes in sea level not insignificant."