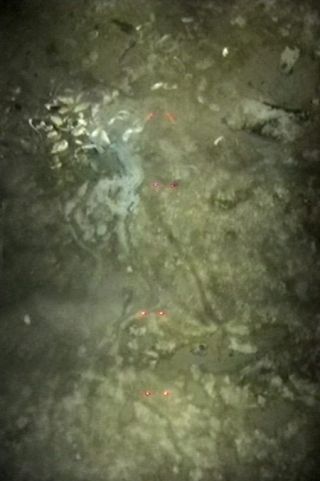 The image shows a mud mound with a central vent that shows up as sort of a bluish tint, and it is surrounded by large bivalves (clams). The central vent has a series of mud flow channels that spill away from the vent center. These were the locations and paths for mud flows that resulted when the mud volcano was more actively venting. The large clams number around 40 or so individuals and their association with the vent indicate a feeding or foraging strategy tied to what ever is coming out of the vent. The scale is shown for this image by the laser points which are 20 cm apart.
(Image: © Eos/American Geophysical Union.)

The collapse of a giant ice shelf in Antarctica has revealed a thriving ecosystem half a mile below the sea.

Despite near freezing and sunless conditions, a community of clams and a thin layer of bacterial mats are flourishing in undersea sediments.

"Seeing these organisms on the ocean bottom -- it's like lifting the carpet off the floor and finding a layer that you never knew was there," said Eugene Domack of Hamilton College.

Domack is the lead author on the report of the finding in the July 19 issue of Eos, the weekly newspaper of the American Geophysical Union.

The discovery was accidental. U.S. Antarctic Program scientists were in the northwestern Weddell Sea investigating the sediment record in a deep glacial trough twice the size of Texas. The trough was unveiled in the 2002 Larsen B ice shelf collapse.

Toward the end of the expedition the crew recorded a video of the sea floor. Later analysis of the video showed the clams and bacteria growing around mud volcanoes.

Since light could not penetrate the ice or water, these organisms do not use photosynthesis to make energy. Instead, these extreme creatures get their energy from methane, Domack said today.

The methane is produced inside the Earth and is distributed to the sea floor by underwater vents.

This type of ecosystem is known as a "cold-seep" or a "cold-vent." The first of its kind was discovered in 1984 near Monterey, California. Since then, similar ecosystems have been discovered in the Gulf of Mexico and in the Sea of Japan.

This recent discovery is the first cold-seep to be described in the Antarctic. The nearly pristine conditions -- which have been undisturbed for nearly 10,000 years -- will serve as a baseline for researchers probing other parts of the ocean. They better hurry though -- debris from the iceberg calving has already begun to bury some of the area.

Domack hopes to find new species and that this discovery will open the door to future Antarctic expeditions, specifically into Lake Vostok, a freshwater lake that sits two miles below the surface.

Any knowledge gained from studies into Antarctic life could help researchers search for life in other subterranean water locations on Earth. And, experts say, this research could better prepare scientists to examine the hypothesized ocean on Jupiter's moon Europa or on Saturn's moon Titan.