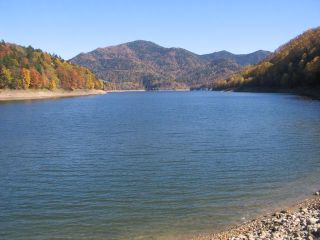 A new study finds 125 large lakes in the Arctic have vanished as temperatures rose over the past two decades. Many other lakes have shrunk.

The lakes once sat atop permanently frozen soil called permafrost. Other studies have shown permafrost is melting around the world, causing low-lying ground to slump and rock to fall from mountains.

"We think that climate warming is thawing the permafrost," said lead researcher Laurence Smith of the University of California, Los Angeles. "It's like pulling the plug out of a bathtub. There's nothing to prevent lake water from percolating through the soil to aquifers below."

"From what we can tell from space, a lake is either just fine or it's gone," Smith said.

The sudden draining could alter entire continental ecosystems, affecting birds and other wildlife that depend on the waterways, Smith and his colleagues say. Migratory birds count on the lakes during summer to feed their young.

The research is reported today in the journal Science.

Thousands of ponds, lakes and wetlands dot the north during summer.

"The loss of these lakes would be an ecological disaster," Smith said.

The researchers tracked changes across a broad swath of Siberia by comparing satellite imagery from 1972 to views from the late 1990s.

Past research suggested that global warming would increase the amount of summer ice melt, and so there would be more lakes. Indeed, in the most northern parts of the study area, where permafrost remains, that's true, the new survey found. But overall, the surface area of lakes in the entire study area declined by 6 percent.

"We were totally surprised by our findings," Smith said. "We were expecting the lake area to have grown with climate change."

As temperatures in the region continue to rise, as many experts predict, Smith expects lakes farther north to vanish, too.

The study was funded by the National Science Foundation.

No Stopping it Now: Seas to Rise 4 Inches or More this Century

2005 Could Become Warmest on Record