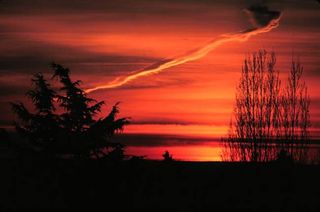 Tendrils of condensation that mark the paths of high-flying jets sometimes form a loose lacework of man-made clouds in the upper atmosphere. The extra blanket of atmospheric insulation from these spreading contrails, as they are called, could accelerate global warming, studies have shown.

Now a group of researchers says something should be done. Their proposal would lengthen the typical airline flight.

High-altitude cirrus clouds, both natural and jet-induced, are unlike thicker low-altitude clouds, which block sunlight from reaching the surface. The thinner cirrus, which float in the sky at 20,000 feet or higher, act like a see-through blanket - letting sunlight pass in, while trapping reflected heat.

A rise in contrail formation -- and therefore blanketing -- is expected in the future, because air travel is growing at 3 percent to 5 percent a year, and cargo transportation by air is increasing by 7 percent a year.

In a recent investigation of air traffic trends, researchers at the Imperial College London came up with guidelines for minimizing the climate impact from contrails. They propose setting ceilings on the altitude that jets can fly: 31,000 feet in the summer and 24,000 feet in the winter.

On long flights, most jets cruise at about 35,000 feet. This conserves fuel, since there is less drag through the thinner, high-altitude air. But the environmental benefit of better fuel efficiency may be offset by the warming aspect of contrail formation.

"We'd like this research to inform government policies, not just in the UK but throughout the [European Union] and the rest of the world so that decision makers can take all the environmental issues into account and do the right thing," said Robert Noland, leader on the investigation.

Contrail effects are not now included in governmental assessments of the impact from air travel.

Condensation trails — contrails — form when hot, humid air coming out of a jet engine mixes with the colder surrounding air of the atmosphere. Water in the air condenses around particles in the exhaust.

Depending on how much moisture is in the air, contrails can be long-lived, spreading out to look more like the wispy cirrus clouds made by Nature.

Because the atmosphere becomes generally colder at higher altitudes, it is easier for contrails to form behind higher-flying aircraft. Therefore, imposing a maximum altitude for commercial flights could reduce contrail formation.

The impact from jet exhaust became evident in the days after the Sept. 11, 2001, terrorist attacks, when most air traffic in the United States was halted.

During the stoppage, astronaut Frank Culbertson, on the International Space Station, told flight controllers, "Normally when we go over the U.S., the sky is like a spider web of contrails. And now the sky is just about completely empty."

During this period, a study found that the difference between high and low temperatures rose one degree Celsius (1.8 degrees Fahrenheit) when the skies were clear of contrails.

A more recent report from NASA documented a 1 percent per decade increase in cirrus cloud cover over the United States, presumably due to increased air travel. The researchers claimed that this extra cloudiness could account for a warming trend of half a degree Fahrenheit per decade in the years between 1975 and 1994.

Requiring planes to cruise at lower altitudes would cause longer flights and require more fuel. But in weighing the two possibilities, Noland and his collaborators conclude that a rise in the number of contrails would be worse for the environment.

"There is little more that aircraft designers can do to increase engine fuel efficiency at high altitude," Noland said, "but designing new aircraft that can be as fuel efficient flying at 20,000 feet, as today's aircraft are at 35,000 feet, would help eliminate contrails."

Besides altitude, the researchers discovered that weather conditions affect the likelihood of contrails. In fact, there are days when the atmospheric conditions make it almost impossible to avoid forming the spindly clouds. The ultimate strategy might entail day-to-day decisions to avoid air masses that are susceptible to contrail formation. Moreover, simple software could be developed to warn a pilot when his or her plane is leaving a "jetprint" in the sky.

Global Warming Likely Cause of Worst Mass Extinction Ever