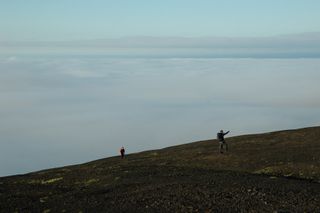 Recently, Terry Plank received an unexpected, but extremely welcome, phone call: She'd just won a $500,000 MacArthur Fellowship, also known as the "genius" grant, to be used at her discretion.

The Columbia University geochemist studies what happens when one of Earth's tectonic plate slides beneath another in a process called subduction, creating strong earthquakes and immense heat that fuels the world's most dangerous volcanoes.

OurAmazingPlanet got Plank on the phone to hear more about her explosive work and how the genius grant might affect it.

OurAmazingPlanet: When did you find out about the MacArthur Fellowship award?

Terry Plank: This is part of the MacArthur myth — you have no idea that you are even being considered and you receive a phone call giving you this fantastic surprise. I was walking to my car to pick up my kid, when I received the call.

OAP: Any guess why you were selected?

TP: That's a hard question to answer. Perhaps it's because I've focused on one thing for so long.

OAP: What one thing have you focused on?

TP: The whole cycle of subduction. As the process that creates the biggest earthquakes and eruptions, it seems like an obviously interesting thing to study. I've studied all aspects of it — what gets subducted, where it goes, how this affects volcanoes. I've drilled up material from deep in the ocean where plates are subducting. I've worked with people who do experiments in the lab, to inflict upon rocks high pressures and temperatures like those deep underground.

That's probably what distinguishes what I've done. And I probably discovered some things along the way.

OAP: Like what? What discovery are you most proud of?

TP: We can't stick a thermometer 60 miles (100 kilometers) into the ground. So I've developed a chemical proxy to measure temperature deep in the earth, which measures the ratio of water and a rare earth element in volcanic rocks after eruptions. It agrees well with other geophysical models.

We need to have indirect ways to tell how hot things are. Magmas are messengers of what's going on deep in the earth. You have to read those messages.

OAP: This technique is applied to molten lava?

TP: No, I'm not that stupid. I study the stuff that shoots up into the air, the ash, like that produced by Iceland's Eyjafjallajökull volcano, the product of explosive eruptions.

I examine the volcanic ash and separate out the crystals that still have some water in them, that were trapped at extreme depths.

OAP: What question are you most focused on?

TP: The explosive connection. When the magma starts, like 60 miles in the earth, what about it sets its course for creating an explosive eruption or not?

OAP: What are you working on now?

Figuring out how much water is coming out of volcanoes. Water is the propellant that determines how explosive these eruptions become, so it's important.  This is new — my past work focused on where the water came from exactly. I'm also working on figuring out how volcanoes "breathe," how they swell and shrink.

OAP: What kind of applications might your work have?

TP: Wouldn't it be nice to know why some volcanoes explode more than others? I'm not in there predicting eruptions. But still, if you're living next to a volcano, you'd kind of like to know what a volcano can dish out. [World's 5 Most Active Volcanoes]

Honestly though, science isn't about applications. For me, it's about finding out how our planet works. I hope what I do is useful but I am wrapped up in the coolness of the earth and finding out how it works.

OAP: What's the most dangerous volcano?

For the United States, It's Mount Rainier. It has erupted explosively in the past, and parts of Seattle and Tacoma are built on material from its previous eruptions. If it erupts again, which it probably will in the next 100 years, the big hazard is that there's tons of ice on top of it, which could create mud flows. If it erupted, all people could really do is get out of the area.

OAP: How did you get interested in geology and volcanoes?

I was born in a rock quarry and I've been interested in minerals since third grade. I always loved going out into the out-of-doors and doing science. I was kind of born to do this.

OAP: You were born in a quarry?

TP: My parents built a house in an abandoned rock quarry in Delaware. There were a lot of lovely rocks and minerals there.

TP: Right now it's olivine, that's what I spend most of my time on.

OAP: What will you spend the award money on?

TP: I'm stilling thinking about it. I won't spend it on a sports car or something, but on science.  I have some risky projects that are ripe for a little seed money — they will go first.