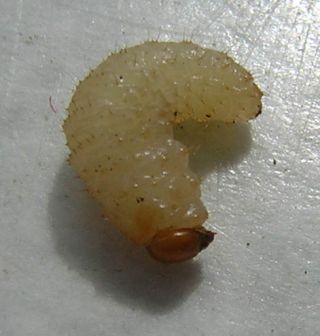 Police in Mexico recently discovered a body burned beyond recognition in a remote patch of woods just off a country road. The hands and feet were missing. There was no physical evidence nearby except a school graduation ring. The body was in such bad shape that investigators couldn't even determine the gender. The only soft tissue available for genetic analysis was a burned fragment of liver, but attempts to get a DNA profile from this bit of evidence proved futile.

However, forensic investigators were able to find useful genetic material in an unusual place — inside the guts of the maggots infesting the corpse's neck and face.

"This is the first reported case of analysis of human DNA isolated from the gastrointestinal tract of maggots used to identify a victim in a criminal case," a group of researchers from Monterrey, Mexico, wrote in a report this month in the Journal of Forensic Sciences.

Ten days before the body was found, a man claimed his daughter had been abducted. He recognized the ring, but couldn't tell if the badly burned corpse was his daughter. The investigators took a DNA sample from the man and then looked at the gut contents of three blowfly maggots from the dead body. They found traces of human DNA in the bugs' stomachs. With this evidence, they found that the victim was female, and they were able to run a paternity test, which came back with a 99.68-percent match to the man, confirming that this was his abducted daughter.

Maggots are commonly used to construct timelines for crimes, as larval development can indicate how long a victim has been dead. Attracted by gases escaping from a decomposing corpse, blowflies often show up within minutes of death, infesting parts of the body and laying their eggs there. It's the larvae that result from these eggs that serve as a timestamp; depending on the temperature they develop from egg to winged adult in a matter of 10 or so days.

But the researchers say this grim case shows how else the insects might be used as clues.

"If maggots are encountered in association with human remains, investigators could utilize this approach if the extraction of DNA from other sources is not possible," wrote the researchers, led by Marta Ortega-Martínez, of Universidad Autónoma de Nuevo León.