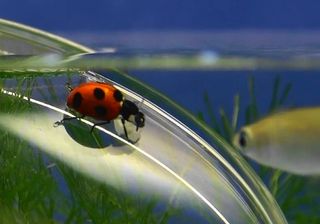 A ladybug walks underwater up a wall. Its sticky feet have inspired an artificial version that could help underwater robots.
(Image: © Japan's National Institute for Materials Science)

Tomorrow's robots could climb up submerged walls in the manner of an underwater Spider-Man by using a gripper design found in beetles.

A number of beetle species can walk straight up smooth, dry plant leaves due to sticky adhesive-covered hair-like structures known as setae at the tips of their legs. Researchers analyzing ladybugs and a leaf beetle (Gastrophysa viridula) unexpectedly discovered that those insects also could use these setae to walk underwater.

To better understand how, scientists let specimens walk down sticks into trays of water. The researchers saw air bubbles trapped between the beetles' setae — bubbles that helped keep the adhesive-covered setae dry and sticky.

The investigators designed an artificial material that mimicked these beetle grippers — a silicone rubber pad covered with silicone rubber bristles about one-tenth of an inch high (2.4 millimeters), with tips about one-hundredth of an inch wide (0.2 mm). They used these pads to stick a plastic toy bulldozer onto the side of a wall underwater.

Even when these artificial grippers were not covered with glue, they were sticky underwater. The air bubbles themselves acted as an adhesive through capillary action, the same phenomenon by which liquids flow up paper towels.

This research could lead to "the application of adhesive devices for robots in the future," researcher Naoe Hosoda of Japan's National Institute for Material Science told InnovationNewsDaily.

This work also might lead to environmentally friendly adhesives for underwater use, Hosoda added.

Hosoda and her colleague Stanislav Gorb detailed their findings in the journal Proceedings of the Royal Society B: Biological Sciences.