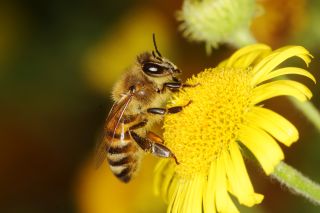 Humans aren't the only species that can ponder abstract mathematical concepts like nonexistence. In addition to some other animals, honeybees understand that the number zero is less than 1, according to a new study.

Dolphins, African gray parrots and nonhuman primates also understand the idea of "zero," but researchers were surprised to find that honeybees also comprehend this concept, considering the insects' tiny brains, according to a statement from RMIT University in Melbourne, Australia.

Honeybees have fewer than 1 million neurons, compared with the 86 billion neurons in humans — and yet, they grasp a concept that humans, by some measures, don't start to understand before preschool, according to NPR.

The researchers set up two cards, each of which had a set of symbols on them, like triangles or circles. Then, they trained a group of the bees to fly to the card with the lower number of symbols. (The bees quickly learned what the humans wanted them to do to get their delicious, sugary rewards).

The trained bees were then shown a card that was empty versus one that had symbols on it. Without any prior training, the bees flew more often to the empty card — thereby demonstrating that they understood that "zero" was a number less than the others, according to the study, which was published Thursday (June 7) in the journal Science.

Although they flew more often to an empty card than to one that had one symbol on it, it became easier for them to differentiate when the symbols' card increased in number. For example, they more often flew to the zero when the other card had four symbols than when it had one, according to NPR.

Perhaps these findings will shed light on the brain mechanism behind what allows us to understand the concept of "nothing," Adrian Dyer, a researcher at RMIT University and senior author of the study, said in the RMIT statement. This understanding, in turn, could help in the development of artificial intelligence that also understands this concept.

"If bees can perceive zero with a brain of less than a million neurons, it suggests there are simple, efficient ways to teach AI new tricks," Dyer said in the statement.