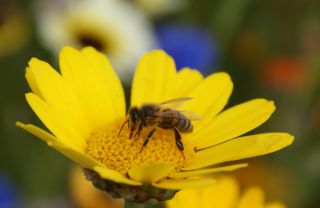 By smothering floral scents, the gases in diesel pollution could inhibit honeybees' ability to find and pollinate flowers.
(Image: © University of Southampton)

Honeybees use both visual and olfactory cues to recognize flowers that produce nectar in return for insect pollination. Not all flowers produce nectar, and bees avoid those that don't by learning to recognize the odors of nectar-bearing flowers.

But these floral odors— which consist of reactive chemicals called volatiles — react with other substances in the atmosphere; in the presence of certain pollutants, these scents can chemically transform into undetectable forms, researchers from the University of Southampton report today (Oct. 3) in the journal Scientific Reports. [On the Hunt: Honeybee Scouts Find Food]

The researchers specifically explored whether nitrogen oxides — a group of highly reactive gases released by diesel combustion— are capable of altering floral odors to an extent that would dampen a bee's ability to recognize desirable flowers.

So the scientists produced a synthetic floral odor from a blend of eight volatiles that closely matched those found in oilseed rape flowers. They released the smell into a series of glass containers, and exposed some but not all of the containers to different concentrations of nitrogen oxide gases, leaving others uncontaminated.

Over the course of two hours, the researchers measured the concentrations of the eight volatile compounds under the various conditions.

The researchers also conditioned a group of honeybees to recognize the synthetic floral odor by repeatedly exposing them to it in conjunction with a nectar reward. The team then introduced the bee groups into the test chambers to determine how the contamination affected smell recognition, which they gauged based on whether the bees extended their proboscis — the strawlike mouthpart they use to suck up nectar — within 10 seconds of exposure to the odor in the study chambers. If the bee did not extend its proboscis, then it was presumed to have lost the ability to recognize the smell.

"A bee has far poorer recognition of an altered floral mix," said study co-author Tracey Newman. "The bee needs to learn the unadulterated version, and if the bee has learned it, it will then struggle with the version that has been chemically altered."

Though the researchers focused on the effects of nitrogen oxide gases on floral odors, other highly reactive contaminants, such as naturally occurring ozone gas, which is toxic only when present close to the ground, may have a similar effect on floral volatiles, the researchers said.

Global honeybee populations have dramatically declined within the past decade or so due to a condition called colony collapse disorder, which has been associated with the spread of synthetic pesticide use and other manmade materials, but remains poorly understood.

The researchers suspect that diesel pollution may be yet another factor playing into colony collapse disorder, and that these new findings should provide further impetus to reduce diesel emissions, said study co-author Guy Poppy.

The team next plans to conduct similar experiments in the field to confirm their laboratory setup accurately reflected natural conditions, and also plans to study the neurological effects of nitrogen oxide gases on the honeybee brain.