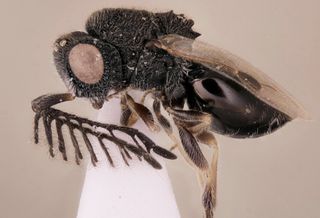 The new parasitoid wasp species, Dendrocerus scutellaris, wears a saw of sorts on its back.
(Image: © Carolyn Trietsch)

Freddy Krueger, eat your heart out. A new species of parasitic wasp comes equipped with built-in saws, which the killer insect may use to slice its way out of its host's body.

In a new paper published Jan. 30 in Biodiversity Data Journal, researchers from Penn State and the Natural History Museum in London report the discovery of Dendrocerus scutellaris, a wasp less than 0.1 inches (3 millimeters) long that sports a series of jagged spines along its back.

Based on the wasp's anatomy, researchers suspect it is an endoparasitoid, a type of wasp that lays its eggs inside a host, often a caterpillar or adult insect. The eggs hatch, and the larvae feed on the host from the inside out. When the food supply runs out and the larvae mature into their adult forms, they chew their way out of the host. [Zombie Animals: 5 Real-Life Cases of Body-Snatching]

D. scutellaris lacks the pointy jaws that most endoparasitoid wasps use to gnaw their way out of their hosts. For that reason, the study authors argue that the saw-like structure on the wasp's back is its ticket to escape; when it's time to free itself, the wasp may rub the structure — called a mesoscutellar comb — against the inside of the host to slice its way out.

Researchers haven't seen this behavior in the wild; they discovered D. scutellaris in the collections of London's Natural History Museum. Some specimens of the species had been in storage, unexamined and unidentified, until they were loaned to Penn State's Frost Museum.

Some other species in the genus Dendrocerus have been discovered previously, and several are parasites of parasites that live inside aphids, the researchers wrote. Besides its saw-like comb, the new species also has dramatic branching antennae, which may help it sense mates or potential hosts.