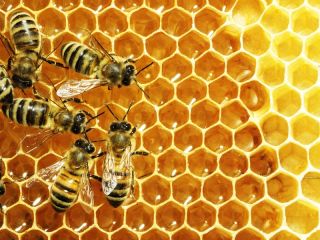 Humans have been using the products of bees for nearly 9,000 years, according to the study, published today (Nov. 11) in the journal Nature. The chemical residues on pots that prove this are from beeswax, so researchers can't say for sure whether Neolithic people used beeswax alone or both beeswax and honey. But, it does appear that honeybees and humans go way back.

"It seems that the first farmers in every single area of Europe were exploiting beeswax from the beginning of farming," said study researcher Mélanie Roffet-Salque, a postdoctoral researcher in chemistry at the University of Bristol, in the United Kingdom. [The 7 Most Mysterious Archaeological Finds on Earth]

The new history of honeybees was a sweet side project for Roffet-Salque, who has been working with University of Bristol biogeochemist Richard Evershed on a long-term project analyzing shards of pottery for chemical traces of food, cosmetics and other substances. Over two decades of research on more than 6,400 pottery fragments, Evershed and his team have come across a few dozen marked with the signature chemistry of beeswax. (Honey, a sugar, degrades much faster than oily beeswax and isn't detectable.)

Stone Age people may have eaten honey and used beeswax for cooking, as well as for making cosmetics and fuel, the researchers wrote. The oldest discovery of beeswax-lined pottery dated back to the 7th millennium B.C. in Anatolia, or modern-day Turkey. The sites where this beeswax was found are also the homes of the oldest-known pottery in Europe or Eurasia. Thus, the presence of honey seemed to spread along with the presence of farming, Roffet-Salque said — from the Near East north and west, reaching the modern-day United Kingdom in roughly 3500 B.C.

In between, beeswax residues were found on pottery shards in northwest Anatolia dating back to 5500 B.C., and in the Balkan Peninsula between 5500 B.C. and 4500 B.C. Sites in Greece dating from between 5800 B.C. and 3000 B.C. yielded pots that once held beeswax. In fact, the Balkan Peninsula was the richest in beeswax, with 5.5 percent of 1,915 Stone Age pot pieces from the region showing beeswax biomarkers, the researchers reported.

Stone Age people in today's Austria and Germany were using bee products by 5500 B.C., the researchers found, and bee products were being used in France by the second half of the fifth millennium. Seven fragments with beeswax on them were found in southern Britain; the most northerly bee products were in Denmark, about 5 degrees latitude north of those sites.

"Above 57 degrees latitude we've not found any beeswax in pots at all, and we've tried hard," Roffet-Salque said. "We've analyzed something like 1,000 sherds from Scandinavia and Scotland and we found lots of lipids and animal fats, but no evidence for beeswax."

Most likely, it was simply too cold for bees to thrive above 57 degrees latitude, Roffet-Salque said.

"We think it's the ecological limit of honeybees in prehistory," she said.

The researchers can't say whether people were beekeeping or simply hunting honey and collecting beeswax from wild hives. It's not very difficult to keep a beehive, Roffet-Salque said, but there's no way to prove that Neolithic farmers did so. However, in 2010, archaeologists announced that they'd discovered clay beehives at a site in Israel dating back 3,000 years. A mural on a tomb in Egypt dating to 2400 B.C. also depicts hives and beekeepers, Roffet-Salque said. Humans may also have been using honey and beeswax even before these pots reveal, she said; it's just that earlier people left no record behind.

"We don't have the pots, so we can't tell," Roffet-Salque said. "But we can say that early farmers were using hive products."