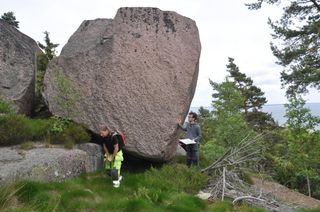 Archaeologists work on the island off Sweden where they discovered evidence of Stone Age rituals. The island has long been linked with tales of witchcraft, supernatural powers and curses.
(Image: © Kenneth Alexandersson)

A Stone Age site where cave rituals may have been performed some 9,000 years ago has been discovered on Blå Jungfrun, an island off the east coast of Sweden. The island has long been associated with tales of witchcraft, curses and supernatural powers.

Blå Jungfrun's "huge boulders and steep cliffs provide a dramatic landscape, and for centuries the uninhabited island has been associated with supernatural powers," wrote a team of archaeologists in the summary of a presentation given recently at the European Association of Archaeologists annual meeting in Glasgow, Scotland.

According to a centuries-old legend, witches gather every Easter on the island to worship the devil himself. Curses have also been associated with the island. For instance, those who remove a rock from the site are said to endure a lifetime of bad luck. [See Images of the Stone Age Site on this 'Supernatural' Island]

How far back these beliefs and stories go is unknown. "The time depth of these stories is shrouded in mist but could be considerable," the archaeologists say.

People who travelled to the island may have practiced various rituals inside the two caves, archaeologists say. One cave contains what may be an altar where offerings could have been made to deities. Meanwhile another cave has an area that could have been used like a "theater" or "stage."

"In two caves, distinct ritual features were identified," wrote the team members, who hail from Kalmar County Museum and Linnaeus University, both in Sweden.

One cave has a massive hollow, about 2.3 feet (0.7 meters) in diameter, which was hammered into a vertical wall. A fireplace lies underneath the hollow. "We believe the hollow is man-made and that the fireplace has been used in connection to hammering out the hollow, probably [on] several occasions," said Ludvig Papmehl-Dufay, an archaeologist with Kalmar County Museum.

Archaeologists said they are not certain what took place here; however, one clue comes from the cave's layout.

"The entrance to the cave is very narrow, and you have to squeeze your way in. [However,] once you're inside, only half of the cave is covered and you can actually stand above the cave and look down into it, almost like a theater or a stage below," said Papmehl-Dufay. [See Photos of the Cave of the Underworld]

The "act of producing the hollow could have been the important part [of the ritual], perhaps even the sound created while doing so," he said. The noise from the hammering and the sight of the fire burning, as viewed from above, may have created an interesting effect for Stone Age audiences, the researchers said.

The second cave yielded yet more strange clues. Archaeologists found a hammerstone and an area that was used for grinding up material. This area "could have been used to place something in, perhaps as part of some form of offering, like an altar," Papmehl-Dufay said.

In between the two caves, the archaeologists discovered a small rock shelter, just 20 by 26 feet (6 by 8 meters), that contained stone tools and seal remains. Radiocarbon dating indicates people consumed the seals around 9,000 years ago.

"A few people could have been sitting or standing, perhaps just resting or spending the night during sporadic stays on the island," Papmehl-Dufay said. "However, more-specific activities with ritual elements to [them] cannot be ruled out, such as feasting in connection to the rituals performed in the nearby caves."

Work on the island is continuing as archaeologists try to unravel the secrets of the site's past. The scientists are currently investigating a layer of material, below one of the caves, that contains quartz that may have been used to help make tools.

Exploring the site has been quite an experience, Papmehl-Dufay said. The uninhabited island is now a national park, and though members of the public are allowed to visit the island during the day, they must stick to certain paths. Any visitors (the archaeologists excepted) must leave before nightfall. There is no water or electricity on the island, so all people traveling to the site must bring all the provisions they need.

"Hopefully, we'll be able to do some more fieldwork on the island the coming spring," Papmehl-Dufay said.