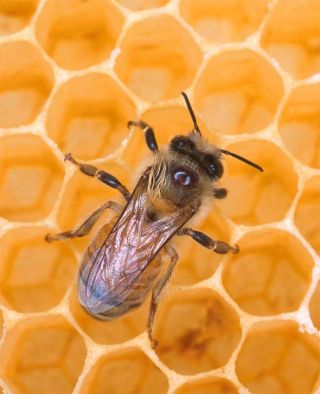 Recently discovered beehives from ancient Israel 3,000 years ago appear to be the oldest evidence for beekeeping ever found, scientists reported.

Archaeologists identified the remains of honeybees — including workers, drones, pupae, and larvae — inside about 30 clay cylinders thought to have been used as beehives at the site of Tel Rehov in the Jordan valley in northern Israel. This is the first such discovery from ancient times.

"Although texts and wall paintings suggest that bees were kept in the Ancient Near East for the production of precious wax and honey, archaeological evidence for beekeeping has never been found," the researchers, led by Guy Bloch of Israel's Hebrew University of Jerusalem, wrote in a paper in the June 8 issue of the journal Proceedings of the National Academy of Sciences.

The hives have a small hole on one side for the bees to come and go, and on the other side is a lid for the beekeeper to use to access the honeycomb. The archeologists used carbon dating on grains that had spilled from a broken storage jar next to the hives to estimate that they were about 3,000 years old.

"The exceptional preservation of these remains provides unequivocal identification of the clay cylinders as the most ancient beehives yet found," the researchers wrote.

The scientists used a high-resolution electron microscope to study the bee remains, and found that their legs and wings suggest they belonged to a different subspecies than the bees currently found in Israel. In fact, the ancient bees most closely resemble those found in modern-day Turkey. That suggests the ancient people may have imported a specialized bee species for its superior characteristics, such as a milder temper or better honey production.

The researchers found three rows of these hives in a courtyard that used to be part of a large architectural complex during the 10th to 9th centuries B.C.

"The location of such a large apiary in the middle of a dense urban area is puzzling because bees can be very aggressive, especially during routine beekeeping practices or honey harvesting," the researchers wrote. They speculate that maybe the honey was so valuable it was worth placing in such a congested area to keep it safe.

Overall, the findings "suggest that beekeeping already was an elaborate agricultural practice in Israel 3,000 years ago," Bloch and colleagues wrote.