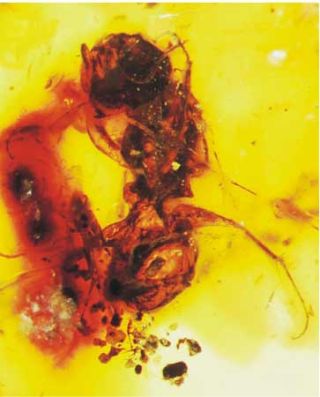 This oldest bee fossil to date was found in an amber specimen from northern Myanmar.
(Image: © Science)

The discovery of the oldest bee fossil supports the theory that bees evolved from wasps, scientists reported today.

The 100 million-year-old fossil was found in a mine in the Hukawng Valley of Myanmar (Burma) and preserved in amber.  Amber, which begins as tree sap, often traps insects and plant structures before they fossilize.

"This is the oldest known bee we've ever been able to identify, and it shares some of the features of wasps," said lead author George Poinar, a researcher from Oregon State University. "But overall it's more bee than wasp, and gives us a pretty good idea of when these two types of insects were separating on their evolutionary paths."

The quarter-inch fossil shares traits of the carnivorous wasp such as narrow hind legs while exhibiting branched hairs on its leg, a characteristic of the modern bee that allows pollen collection.

Around the same time the bee was trapped, plants that rely on mechanisms other than the wind to spread their seeds, started expanding and diversifying. Prior to that, the world was mostly green with conifer trees that depended on the wind for pollination.

"Flowering plants are very important in the evolution of life," Poinar said. "They can reproduce more quickly, develop more genetic diversity, spread more easily and move into new habitats. But prior to the evolution of bees they didn't have any strong mechanism to spread their pollen, only a few flies and beetles that didn't go very far."

The study is detailed in Oct. 27 issue of the journal Science.