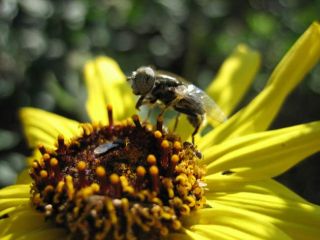 Syrphid fly feeding on nectar of California sunflower. The fly transfers pollen from one flower to the next, playing an important role in pollination.
(Image: © UCSB)

Plants in some of the most diverse ecosystems on Earth don't have enough birds and bees to allow them to fruit to their full potential, a new study finds.

It is not clear, however, whether the less-than-perfect pollination is new or if it's the sort of challenge some plants have always faced.

Researchers analyzed 482 field studies that investigated 241 wild flowering plant species since 1981 on all continents except Antarctica. Many aren't getting enough pollen to reproduce. The problem is most noticeable in regions with the highest diversity, hotspots characterized by stronger competition among plants for pollinators, the study indicates.

"The global pattern we observed suggests that plant species in species-rich regions exhibit a greater reduction in fruit production due to insufficient pollination than plant species in regions of lower biodiversity," said Susan Mazer, a professor of biology at the University of California, Santa Barbara.

"Many plants rely on insects and other pollen vectors to reproduce," said Jana Vamosi, a post-doctoral research associate in the University of Calgary's Department of Biological Sciences and lead author of a paper on the work. "We've found that in areas where there is a lot of competition between individuals and between species, many plants aren't getting enough pollen to successfully reproduce. If plants can't survive, neither can animals."

It is not clear, however, whether this is a new problem related just to short-term decline in birds, bees and other pollinators, or if it is a chronic one that's been ongoing for millions of years.

"We don't know how long this pattern has existed because the kind of field experiment needed to detect the problem of low pollen transfer has been conducted by ecologists only for the last 25-30 years or so," Mazer told LiveScience.

"The pattern raises the alarm, however, that species in species-rich regions face two challenges that increase the risk of extinction: habitat destruction, which is occurring at alarming rates in the tropics, and reduced pollinator activity," Mazer said.

The results are detailed in the Jan. 17 issue of the Proceedings of the National Academy of Sciences.