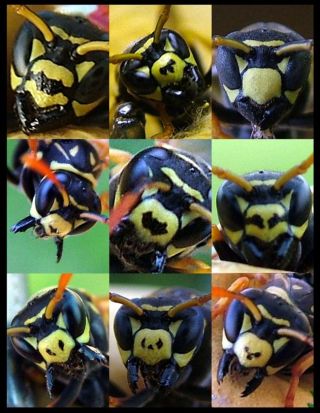 Variable markings on the faces of female paper wasps indicate the bearer's quality and status. The blotchier the face, generally the more dominant the wasp. Photo Â© Elizabeth Tibbetts

Humans are known to sugarcoat their status, using cosmetics, clothing, cars and creative resumes in an effort to climb a rung on the social ladder. But serious imposters might want to take a cue from the cheating wasp.

Blue-collar wasps made up to look like CEOs get beat up by their superiors and peers.

In a new study, spots typical for top-dog female wasps were painted on the faces of their subordinates. The phonies got harassed more often and for longer periods than other wasps when paired up in the equivalent of a wasp-world boxing ring.

"Wimpy wasps with spotty faces, who are signaling that they are strong, get beaten up by their opponents," study leader Elizabeth Tibbetts of the University of Arizona told LiveScience. The behavior "prevents cheaters from prospering," she said.

The results will be detailed in the Nov. 11 issue of the journal Nature.

Visual clues to quality and status are common in the animal world, from the redness of a cardinal to the number of spots on a peacock's tail. The paper wasp's badge of importance, the blotch face, is known to be related to larger body size.

Yet scientists have long wondered how cheating is prevented. Specifically, why wouldn't a wasp of small stature sometimes be endowed with lots of those wonderful black facial markings, then try to run the wasp world like an insectile Napoleon?

One theory is that the evolutionary cost of cheating is too high. Other researchers have speculated that cheaters simply suffer social consequences.

Tibbetts and her colleague, James Dale of Simon Fraser University in British Columbia, captured wild female wasps, paired them off and let 'em duke it out. Wasps from miles around were lured into battle, to make sure combatants wouldn't recognize each other.

The challengers paced, stared and grappled, according to the ringside analysis. Matches lasted anywhere from five minutes to two hours.

In some of the fights, one contestant had extra splotches applied to her face with black Testor's model paint. In those bouts, the fighting was more intense. (To make the engagements more interesting, dominant wasps also sometimes had their leader's badges removed by application of yellow paint. Think of it as gluing Muhammad Ali's mouth shut.)

Sometimes a fraud would establish dominance in a match only to lose it in later rounds. Scientists had never before seen such a turnabout in wasp squabbles. And if a cheating wasp won, it was much more likely to get harassed after the final bell.

Assuming the honest wasps weren't just reacting to the odor of Testor's, there must be some way they sleuthed out the imposters.

"Our best explanation is that there's some other information about wasp quality that doesn't match the altered face," Tibbetts said.

"The result clearly supports the hypothesis that there are social costs to erroneously high status signals," said Rice University evolutionary biologist Joan Strassmann, who wrote an analysis of the study for the journal. "Cheating subordinates are punished."

"That kind of aggression has lasting repercussions," Tibbetts said. "They have less time to feed and to take care of their offspring."

Tibbetts does not think humans have these same formal status badges, but we are "constantly communicating information about ourselves," she says. "The honesty of some of these signals could be maintained through social costs." For example? "What prevents wimpy guys from walking around wearing a karate black belt? The answer is probably that they would eventually get beaten up for dishonestly signaling their fighting ability. It is the same thing in wasps."