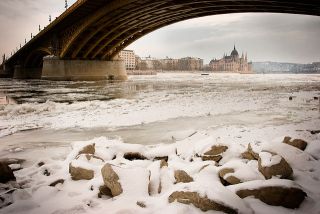 The winter weather that has socked parts of the Northern Hemisphere in recent years has been extreme enough to spawn a new vocabulary: "Snowpocalypse" and "snowmageddon" were invented to describe the huge blizzards that dumped record-breaking snows on the Midwest and Northeast in 2010.

Overall, the winters of 2009-10 and 2010-11 saw the second and third largest snow cover levels ever recorded in the Northern Hemisphere. And this year extreme, record-breaking cold has gripped Europe.

What's to blame? New research indicates that these winter extremes could be tied to a surprising culprit: a steep decline in sea ice in Arctic, following a warming of the polar region.

"We conclude that the recent decline of Arctic sea ice has played a critical role in recent cold and snowy winters," researchers wrote in a study published Feb. 27 in the online early edition of the journal Proceedings of the National Academy of Sciences.

Using a combination of observational data and computer modeling, researchers connected the autumn changes in Arctic sea ice and the resulting changes in atmospheric conditions and increased moisture levels to colder temperatures and increased snowfall across North America, Europe and Asia.

Since the late 1970s, when the satellite records began, Arctic sea ice cover has declined steeply. Some researchers have warned that if current patterns continue, the Arctic could experience nearly ice-free summers within the next few decades.

A lack of sea ice can evidently alter atmospheric circulation patterns by weakening westerly winds, increasing the amplitude of the jet stream and increasing the amount of moisture in the atmosphere, said Jiping Liu of Georgia Tech, lead author of the paper.

"These pattern changes enhance blocking patterns that favor more frequent movement of cold air masses to middle and lower latitudes, leading to increased heavy snowfall in Europe, and the Northeast and Midwest regions of the United States," Liu, a senior research scientist at the university's School of Earth and Atmospheric Sciences,  said in a statement.