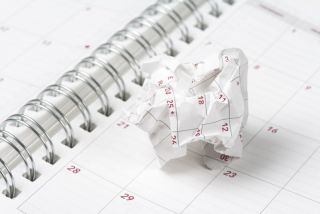 Forget leap years, months with 28 days and your birthday falling on a different day of the week each year. Researchers at Johns Hopkins University in Maryland say they have a better way to mark time: a new calendar in which every year is identical to the one before.

Their proposed calendar overhaul — largely unprecedented in the 430 years since Pope Gregory XIII instituted the Gregorian calendar we still use today — would divvy out months and weeks so that every calendar date would always fall on the same day of the week. Christmas, for example, would forever come on a Sunday.

"The calendar I'm advocating isn't nearly as accurate" as the Gregorian calendar, said Richard Henry, an astrophysicist at Johns Hopkins who has been pushing for calendar reform for years. "But it's far more convenient."

The trouble with designing a nice, regular calendar is that each Earth year is 365.2422 days long, leaving extra snippets of time that don't fit nicely into a cycle of 24-hour days. If this time isn't somehow accounted for, the calendar "drifts" relative to the seasons, and the next thing you know, Christmas Day is coming after the spring thaw.

The Gregorian calendar deals with this by adding an extra day (Leap Day) to February about every four years, correcting for the seasonal drift.

"It's really incredible that in the Middle Ages, they were able to invent a new calendar that was so accurate," Henry told LiveScience. What bothers him about the Gregorian calendar, though, is the frustrating tendency for days of the week to jump around. Because 365 is not a multiple of seven, 7-day weeks don't fit evenly into the Gregorian calendar. That means that each year, dates shift over one day of the week (two during leap years).

"Everybody has to redo their calendars," Henry said. "For sports schedules, for schools, for every damn thing. It's completely unnecessary."

Under the Hanke-Henry Permanent Calendar (named after Henry and Steve Hanke, a Johns Hopkins economist who also advocates calendar overhaul), every date falls on the same day of the week — forever.

To account for extra time, Hanke and Henry drop leap years and instead create a "leap week" at the end of December every five or six years. This extra week, dubbed "Xtr", would adjust for seasonal drift while keeping the 7-day cycle on track.

"The new calendar can be fairly often off as much as three days on the seasons, but looking out, could you tell?" Henry said. "Of course you couldn't tell."

The economics of time

For Henry, the new calendar is worth it because of how much time and effort goes into revising the calendar each year. He first got into the idea of calendar reform while having to yet again update lecture dates and syllabi for his students. He quickly discovered that there were calendar-reform advocates with suggestions on how to do away with that problem, he said.

"My heart sank, and I thought, 'Oh my god, I don't want to get involved in calendar reform. It's the stupidest waste of time. It's hopeless,'" Henry said.

But he put the Hanke-Henry calendar online anyway, weathered a storm of publicity, and watched nothing come of it. This time, he said, he's hoping that the influence of Hanke, the economist, will spur real interest in change.

To Hanke, the need for a new calendar goes beyond the annoyance of out-of-date syllabi. Calculations for interest payments, for example, are complicated by the irregularity of months. Different financial entities deal with these irregularities differently, meaning that the amount of interest accrued depends not just on time, but on who did the calendar-related math. The Hanke-Henry calendar would do away with these irregularities, streamlining the process, Hanke and Henry wrote in the January 2012 issue of Globe Asia magazine.

The new calendar would also be more business-friendly, the researchers wrote. Meetings and holiday time off would be easier to schedule. Other businessmen's attempts at calendar reform, including one by Eastman Kodak founder George Eastman, failed because they didn't always maintain Sundays as weekends, disrupting the Sabbath for Christians. The Hanke-Henry calendar doesn't have that problem.

"The natural date for the introduction of these changes is 1 January 2012, because it is a Sunday in both the current Pope Gregory calendar and the simple, new calendar," the researchers wrote.

While that would not be enough time to update computers to the new calendar, he said, the target for complete technical adoption could be January 1, 2017, when the Gregorian year again begins on a Sunday.

But no matter how simple Hanke and Henry's suggestion is, it faces high psychological barriers.

"My favorite reason it shouldn't be done is, 'But my birthday will always be on a Wednesday!'" Henry said. "Of course the answer to that is you can celebrate your birthday whenever you want."

Another problem: "To my extreme annoyance, my calendar contains four Friday the 13ths each year," Henry said. "Isn't that awful?"

Nonetheless, Henry has some hope for a simpler calendar. After all, he said, smoking has gone from completely acceptable to often banned in public, in just a few short decades. The federal government once managed to institute a nationwide speed limit of 55 miles per hour. And despite centuries of habit, no one says "Peking" anymore when they mean "Beijing."