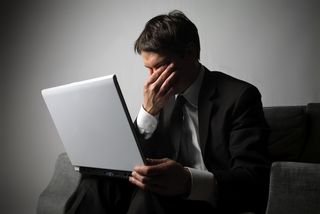 After the release of stolen emails between climate scientists, researchers found their inboxes flooded with hate mail.
(Image: © oily, Shutterstock)

In the days before Thanksgiving, climate researchers got an unpleasant holiday surprise: A new release of emails between climate scientists hacked from a University of East Anglia (UEA) server in 2009.

The release, quickly dubbed "Climategate 2.0" after the initial 2009 "Climategate" hacking, drew strong condemnation from scientists involved in the emails, as well as a certain sense of wearied exasperation.

In 2009, an unknown hacker stole thousands of documents, including emails between climate researchers, from a UEA server and released a portion of them publicly. Climate-change skeptics pounced on the emails as evidence that the researchers were fudging data and suppressing debate in the climate field; however, multiple investigations, including by the researchers' universities, independent panels, and the U.K. House of Commons, found no evidence of scientific misconduct in the documents. The new document dump reportedly includes documents taken in 2009, but not released earlier.

Mann and other scientists involved in the UEA emails say they never expected their careers to veer into controversy. In various ways, outspoken climate scientists say they've worked hard to emotionally distance themselves from the often-personal attacks they receive even as they continue to speak out for their work and their reputations.

"You realize there is this Internet doppelganger that has your same name and your same place of work and your same publication list, but who is a monster who believes in terrible, terrible things," said Gavin Schmidt, a climatologist at the NASA Goddard Institute for Space Studies in New York. "It isn't anything to do with anything you've actually said or done."

Schmidt said that when he started his career as a mathematician, he didn't know he'd be doing "anything of interest at all." Nonetheless, he dove into the climate debate voluntarily, he said, as a scientist willing to comment publicly on climate change and as a founding member of the climate outreach blog RealClimate.

Other researchers were, as Schmidt puts it, "dragged kicking and screaming into the public realm." A prime example is Mann, whose famous "hockey stick" graph, showing a sharp uptick in Northern Hemisphere temperatures in the 1900s (a graph that was shaped like a hockey stick), became the center of a firestorm after its publication in the 2001 Intergovernmental Panel on Climate Change (IPCC) Third Assessment Report

Mann said he was caught off guard by the amount of attention his work received, but said he quickly developed a thick skin.

"Early on when we were subjected to these attacks, a hero of mine, Steve Schneider of Stanford, who sadly passed away far too early a year ago, he took me aside and he said, 'You know, don't take this personally, what these attacks are is a testament to the importance of your work,'" Mann said.

Not taking it personally

Mann said that advice helps remind him that the debate over climate change is political, not personal. He says he sees most attacks coming not from grassroots efforts, but from industry consortiums trying to protect their economic interests.

"These attacks, they don't represent the feelings of actual people," he said. "They are so-called 'astroturf' organizations that will bus people in to try to create the false appearance of grassroots support."

Other researchers say they try to keep the same perspective, but that it can be difficult. [The History of Human Aggression]

"In 2009, when all of this first occurred, I got many emails, really nasty emails, really abusive emails," said Kevin Trenberth of the National Center for Atmospheric Research in Boulder, Colo., who is a recurring character in the Climategate emails. "I put them all together, and there were like 91 pages of these things."

Trenberth said he tried to engage with some critics, with limited success. Some responded cordially, he said, but others had already decided he was a "bad guy."

"I tried not to take it personally, but sometimes it's a bit difficult when some of these attacks occur the way they do," Trenberth said.

Nonetheless, Mann, Schmidt and Trenberth all said they've learned to handle the publicity — although all three said they've known scientists who have chosen not to speak to the media or retreated from the public eye, in response to the vitriol of the climate debate.

"Some of the reaction of my colleagues has been to, let me put it this way, to withdraw into the ivory tower," Trenberth said. "You know, 'Why should I even deal with this stuff?' I've tried to go in the other direction and do even more in spite of all the abuse that you get."

According to Schmidt, it's easy for scientists to focus on the scientific community and ignore the public controversy, given the size of the gap between the two conversations. The vast majority of climate researchers are convinced by the data that human-caused warming is underway, though spirited debate surrounds the complex feedbacks in the climate system.

Still, there is some concern that the political debate will hinder the scientific work still to be done. Trenberth pointed out that Congressional budget cuts nixed the National Oceanic and Atmospheric Administration's plans to establish a National Climate Service, which would have drawn together disparate climate data and projects under one umbrella.

"Setting up a climate service is actually a good management tool," Trenberth said. "The Congress has blindly struck out at anything that has 'climate' in it, and that's happening on Capitol Hill."

Mann said he worries that the email hacks could have a chilling effect on internal debate among scientists who fear stolen emails could be taken out of context. Anti-climate-change groups claim that the hacked emails represent climate scientists quashing debate, he said, when in fact they often represent extremely vigorous debate.

"They're actually working entirely against what they claim to want, which is vigorous discourse in the scientific community," Mann said. "They are, in fact, impeding that."