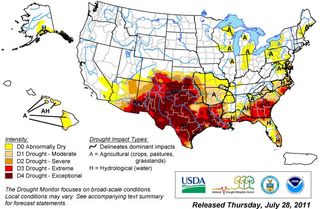 Nearly one-fifth of the contiguous United States is in the grip of extreme drought, with some regions experiencing bone-dry conditions never before seen since record-keeping began in the late 1800s, according to the National Drought Mitigation Center (NDMC) at the University of Nebraska-Lincoln.

In total, drought or unusually dry conditions are affecting more than 40 percent of the contiguous United States, said Brian Fuchs, a climatologist at the NDMC. To determine drought severity, the institution looks at a huge number of indicators, some stretching back for more than a century, and others gleaned from more recent satellite records. Precipitation data, stream gauge records, reservoir and groundwater levels and soil moisture all play a part, along with firsthand reports from 300 experts stationed around the country.

"The drought event we're seeing basically started about 10 months ago in Texas, and then spread," Fuchs told OurAmazingPlanet. It has since developed into a situation remarkable for both its magnitude and scope, he said.

"The last nine to 10 months has been the driest on record across the entire state of Texas for records that go back to the 1890s," Fuchs said. In addition, the affected area is far larger than in past drought events, Fuchs said.

The case in Midland

"Right now, it's very brown," said Greg Murdoch, a senior meteorologist with the National Weather Service in Midland, Texas, one of the areas hardest hit. "The trees are starting to show the effects. Where there's not brown grass, there's basically just dirt."

Since January, Midland has gotten 0.16 inches (0.4 centimeters) of rain. "That's 7.5 inches [19 cm] below normal, and basically every place across west Texas is in that same boat," Murdoch told OurAmazingPlanet.

Conditions have improved slightly in some states in the last several weeks, according to the NDMC. Thanks to the fading of La Niña, a system of cyclical winds that typically bring hot, dry conditions to the southern United States, Fuchs said parts of Louisiana and Florida got some rain in July.

"So there is hope that we still continue to see some drought improvements, but it doesn't look like the situation in Texas and Oklahoma is going to improve much at all, and it's tough to say that because they've been through a lot already," Fuchs said.

There had been some hope that Tropical Storm Don might bring some relief to Texas, but aside from rain showers around the Rio Grande Valley, the storm did little to break the dry spell.

Tropical storm Emily is hovering over the eastern Caribbean, but forecasters predict it will head west, and it looks like the storm will steer clear of Texas.

Murdoch said that until mid-September, when seasonal change typically brings cooler weather to the area, the hot, dry conditions in Texas may persist. Along with many other parts of the country, west Texas has experienced scorching temperatures — Midland has had 41 days over 100 degrees Fahrenheit so far this year — which have only served to reinforce the dry conditions.

"It definitely feels like a serious situation here in Midland," Murdoch said. "It's widespread and its effects are well-noticed, and in my 20 years out here, this is the worst I've seen."