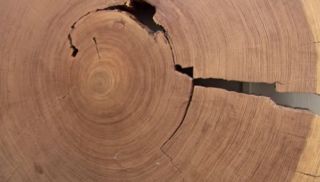 The size and color of tree rings tell the story of what time of year the ring formed and how wet or dry the season was.
(Image: © NSF.gov)

New wood formed in a tree during spring and summer is light in color. Toward the end of a growing season, new cells formed are smaller and have darker thicker walls. The wood is more dense and darker.

That annual pattern creates rings. They tend to be wider in wet, good-growing years.

The thickness and darkness of the dark part (as well as the light part) can vary depending on many things in a given season: precipitation, sunlight, temperatures, and disease and insect infestations, volcanic eruptions and fire.

Near the core of a tree, rings will be tighter and darker if a young tree grows up in the shade a mature forest. Soil conditions that might change over time can also affect the growth.

"The patterns in tree rings tell a story," explains Erin McMurry, research assistant in the University of Missouri'sCollege of Agriculture, Food and Natural Resources Tree Ring Laboratory. "We think of tree rings as ecological artifacts. We know how to date the rings and create a chronology, so we can tell when there has been a fire or a drought occurred and unlock the history the tree has been holding for years."

Tree rings have been used to understand everything from ancient droughts to hurricane activity before records were kept.

McMurry and her colleague solved a longstanding mystery by studying tree rings.

On May 19, 1780, it was black as night at noon. Some people in New England thought judgment day was at hand. Accounts of that day, which became known as "New England's Dark Day," include mentions of midday meals by candlelight, night birds coming out to sing, flowers folding their petals, and strange behavior from animals.

The scientists announced on June 6, 2008 that evidence from tree rings reveals massive wildfires as the likely cause, one of several theories proposed after the event, but dismissed as "simple and absurd."

"A fire comes along and heat goes through the bark, killing the living tissue. A couple of years later, the bark falls off revealing the wood and an injury to the tree. When looking at the rings, you see charcoal formation on the outside and a resin formation on the top that creates a dark spot," said Richard Guyette, director of the Tree Ring Lab at the University of Missouri.