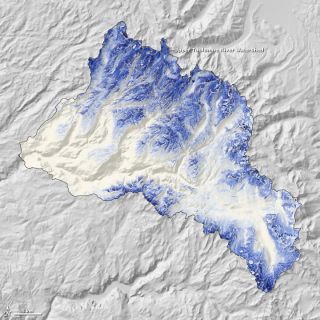 A map of the water locked up in snow in California's Tuolumne River basin. Data from NASA's Airborne Snow Observatory is helping keep track of the state's dwindling snowpack in a time of drought.
(Image: © NASA Earth Observatory image by Robert Simmon, using data from Thomas Painter and Landsat data from the U.S. Geological Survey.)

California's drought has left the state's snowpack — the snow that accumulates and remains piled up on mountaintops during the winter — at less than one-third of its historical average. Airborne measurements are now helping researchers see just how scanty the snow supply is.

Understanding the snowpack is crucial, because runoff from the snow in the Sierra Nevada mountains provides much of the state — including the heavily populated San Francisco Bay Area — with drinking water.

NASA's Airborne Snow Observatory (ASO) was launched in 2013, and uses an airplane to fly two sensing instruments over the Tuolumne River Basin in the Sierra Nevada mountains. One instrument is lidar, a technology that shoots lasers into the ground to measure the depth of the snow. This measurement allows scientists to calculate the amount of liquid water that will run into the river basin during the spring snowmelt, according to NASA's Jet Propulsion Laboratory.

The second instrument, an imaging spectrometer, measures albedo, or the amount of sunlight reflected by the snow. Knowing the albedo helps researchers determine how quickly the snow will melt.

The plane flies over the river basin weekly during the winter and spring, until the snow melts in July. This image was taken on April 21, 2013. Darker areas show deeper, denser snow, according to NASA's Earth Observatory.

In 2013, California was already in drought, and some areas of the state saw their driest year on record. This year brought little relief. Mount Shasta's slopes were nearly bare in January. Normally, the snow cover on the mountain is at 30 percent of its April peak, but this year, it was only at 5 percent.

Meanwhile, water managers have warned that less water means less dilution of pollution and other contaminants. Towns that rely on well water are at the greatest risk of contaminated water, according to February reports. A slight uptick in storms during March helped ease the pain but didn't end the drought: The snowpack in the Sierras remains at 32 percent of average, the California Department of Water Resources (DWR) announced April 1.

"We're already seeing farmland fallowed, and cities scrambling for water supplies," DWR Director Mark Cowin said in a statement. "We can hope that conditions improve, but time is running out, and conservation is the only tool we have against nature's whim."