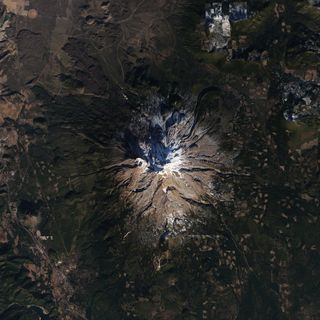 Images of a nearly bare Mount Shasta taken from space reveal the severity of the California drought.

The volcanic peak, normally blanketed in snow this time of year, has almost no snow cover on the south, west and eastern slopes. Snow cover has decreased dramatically since November, when the mountaintop looked mostly white, NASA's Earth Observatory reported.

Normally, snow cover peaks around April 1, and by the first of the year, 15 to 30 percent of that snow has already accumulated.

"The Shasta snow cover reflects two dry winters (in 2012 and 2013), plus a December 2013 snowfall that puts the area less than 5 percent of the way toward the April 1 average," Roger Bales, a hydrologist at the University of California–Merced, told the Earth Observatory. Right now, snow cover may even be below the permanent snow line, Bales said.

The images were captured using the Operational Land Imager (OLI) on the Landsat 8 satellite.

The volcanic slopes are a popular destination for skiers and other winter sports enthusiasts. But this year, with just 2 to 3 inches (5 to 7.5 centimeters) of the white stuff on the ground, most ski lifts were closed on Jan. 16, according to the Earth Observatory. Die-hard skiers had to hike up a few glaciers to get their fix.

But a depressing ski season is the least of California's worries. Snowpack provides the water supply for many parts of the state, meaning water shortages could be imminent.

The Colby Wildfire burning near Los Angeles likely took hold because of the unusually parched conditions this winter.  And the drought, which is gripping much of the Western United States, could also threaten crop yields.

"Precipitation in some areas of the state is tracking at about the driest year of record," the California Department of Water Resources reported on its website, as quoted by the Earth Observatory.

"On average," the observatory quoted, "about half of California’s statewide precipitation occurs in December, January and February, with only a handful of large winter storms accounting for the difference between a wet year and a dry one."