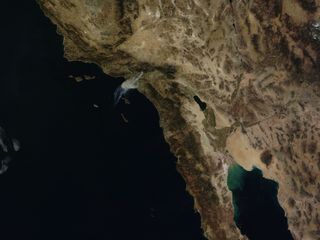 Images of the Colby Fire as seen from space on the morning of Jan. 16.
(Image: © Holli Riebeek and courtesy LANCE/EOSDIS MODIS Rapid Response Team at NASA GSFC)

New satellite images reveal the rapid growth of a wildfire that is burning in Glendora, Calif., near Los Angeles.

Though the Colby fire started small yesterday (Jan. 16), ash and smoke hovered over much of the metropolitan area by the afternoon, and has led to air quality advisories for the region. The images were captured using the Moderate Resolution Imaging Spectroradiometers on NASA's Terra and Aqua Satellites. Two images, one captured  yesterday morning and another in the afternoon, shows how rapidly the fire has spread, NASA's Earth Observatory notes.

The fast-moving fire, which has consumed more than 1,700 acres and destroyed five homes, according to The Los Angeles Times today (Jan. 17), may be a harbinger of a rare winter fire season for the region. The severe drought gripping California and parched chaparral — the perfect tinder for a fire — combined with an unusually gusty January, have created the perfect wildfire conditions. As of yesterday evening, the fire was 30 percent contained, according to Inciweb (the interagency site used to keep track of wildfires).

Officials believe that three men accidentally ignited the wildfire near the Colby trail in the Angeles National Forest by starting a campfire in an area not designated for it. The Glendora police chief noticed the three men tossing pieces of paper onto a fire when a gust of wind blew embers everywhere.

The men were arrested on suspicion of recklessly starting a fire, according to the Los Angeles Times.

More than 1,000 firefighters, along with nine helicopters and two fixed-wing aircraft, are working to contain the blaze, the Los Angeles Times reported.