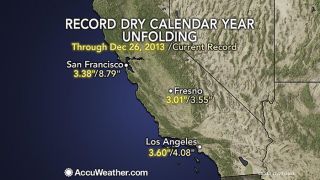 Los Angeles, San Francisco and Fresno are just a few of the cities on track to set new records for the driest calendar year on record.
(Image: © AccuWeather.com)

California's drought is putting what little water the state has left at risk, officials said on Tuesday.

Not only are 10 communities at risk of running out of water within 60 days, rural areas that consume well water face danger from contamination, according to Reuters. With less groundwater to dilute contaminants, they become more concentrated.

State officials issued these warnings at a legislative hearing on California's drought, which has shrunk snow cover and left cities scrambling to conserve water. The state would need an unlikely foot (0.3 meters) of rain before the wet season ends on March 31 to bring an end to the drought this year, making full relief unlikely.

The communities at risk of drying up are getting help in the form of trucked-in water and emergency pipes to connect them to public water systems, according to Reuters. Other small drinking water systems are also getting state assistance as President Obama sends $200 million in federal aid. Agriculture is particularly hard-hit, with estimates of the cost of farmland temporarily fallow because of the drought running to $5 billion.