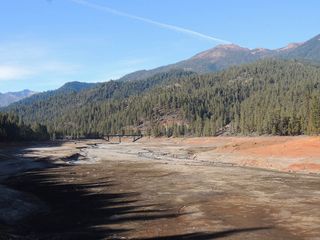 Trinity Lake in northern California, one of the state's largest water reservoirs, was at 30 percent capacity in August. This photo shows the lake in February.
(Image: © California Water Science Center)

Natural temperature swings in the ocean, not global warming, are driving California's extreme drought, according to a new government study.

Researchers said sea surface temperatures in the equatorial Pacific Ocean set up an atmospheric roadblock off the West Coast that diverted winter storms away from California. The state relies on winter rain and snow for most of its yearly water.

The roadblock is a persistent ridge of high pressure that first formed in 2011 during a La Niña event. Even though La Niña broke down after the 2011-2012 winter, the western equatorial Pacific Ocean remained a warm water bull's-eye, a pattern known to trigger droughts in the Southwest and California, the researchers report.

In the new study, scientists determined that the high-pressure system, dubbed the "ridiculously resilient ridge" by a California forecaster, continued through the 2013-2014 winter because of these favorable ocean temperatures. The pool of warm water generates atmospheric winds that form patterns of high and low pressure (called planetary waves) that can get stuck off western North America as a high-pressure ridge. [The 5 Worst Droughts in US History]

The ridge and its accompanying drought are opposite the conditions that climate models predict under global warming, lead study author Richard Seager, a professor at Columbia University's Lamont-Doherty Earth Observatory in New York, said today (Dec. 8) during a news briefing. Climate models project low-pressure systems off the West Coast, with wetter winters and drier springs for central and northern California, he said. "Overall, it's a shorter, sharper rainy season," Seager said.

The report, "Causes and Predictability of the 2011-14 California Drought," was released today by the National Oceanic and Atmospheric Administration (NOAA) and has not been published in a peer-reviewed journal. The study compares drought observations with 160 climate model simulations to tease out the most important factors controlling the drought. The researchers plan to submit the work to the Journal of Climate, Seager said.

The study authors are not questioning whether climate change exists, only its effects on the short-term drought.

"There is no question global warming continues to unfold," said Marty Hoerling, study co-author and a researcher with NOAA's Earth System Research Laboratory in Boulder, Colorado. "The three-year drought is not related to the overall warming, but [droughts in California] are something that happens time and time again."

Scientists not involved with the study, such as Penn State meteorologist Michael Mann, criticized the report for not including the effects of California's record-high temperatures in 2014. Heat makes droughts drier by amplifying moisture loss from soil and plants and increasing water demand.

According to the new report, which measures drought by precipitation, last winter was California's sixth-driest since 1895, and the state's three-year drought is second only to the historic 1974 to 1977 dry spell, which sparked California's first big water conservation movement.

But if one measures drought by soil moisture, an indicator of both precipitation and temperature, then California's drought is the worst in 1,200 years, according to a study published last week (Dec. 3) in the journal Geophysical Research Letters.