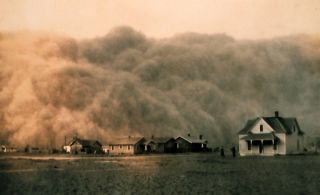 The Dust Bowl drought of the 1930s was arguably one of the worst environmental disasters of the 20th century. New computer simulations reveal the whipped-up dust is what made the drought so severe.

Scientists have known that poor land use and natural atmospheric conditions led to the rip-roaring dust storms in the Great Plains in the 1930s. Climate models in the past few years also have revealed the effect of sea surface temperatures on the Dust Bowl.

"What is new and what had not been done before is to work out whether the dust storms from the drought and land use had any impact on the drought," said Richard Seager of Lamont-Doherty Earth Observatory (LDEO) in New York.

"You had dust storms that were unprecedented in the recent historical record," said lead researcher Benjamin Cook of NASA Goddard Institute for Space Studies. "So it was on the level of dust emissions that nobody in living memory and probably much before that had ever seen."

Using computer simulations, Cook, Seager and Ronald Miller of LDEO found the "black blizzards" exacerbated the drought and pushed it northward into the Great Plains.

The airborne dust particles reflected sunlight back into space, leading to cooler surface temperatures. As temperatures dipped, so did evaporation. "You basically cut off the moisture source to clouds and precipitation," Cook said.

Even so, the researchers say, global warming and an increased pressure to expand agriculture in light of a possible food crisis are creating conditions ripe for dust storms in other regions worldwide.

"This is the type of phenomenon that potentially we could start seeing in places like China," Cook told LiveScience, "where you're having some desertification problems, and you're having a lot of land degradation."

The study, detailed online in the journal Geophysical Research Letters, was funded by the National Oceanic and Atmospheric Administration (NOAA), National Science Foundation (NSF) and NASA.