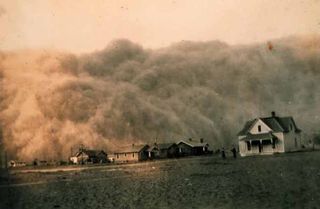 Water, water everywhere, and not a drop to drink. But wait—more than 60 percent of the nation now has abnormally dry or drought conditions, a climatologist says, and there is actually plenty to drink. In the United States the definition of "drought" has become watered down and muddied as policy makers fight over decades-old water rights and homeowners remain largely oblivious to the potentially severe shortages that loom.

Drought has been the standard forecast in the southwestern United States for the past decade, and as global warming dries out this and other regions around the world, and booming populations cause more water shortages, the word is likely to be tossed around even more.

"There is no single definition for drought," according to the National Drought Mitigation Center’s website. It is one of the planet’s most complex natural hazards, and exactly when a drought begins and ends is difficult to determine because it tends to develop gradually.

“Drought’s a matter of perspective,” said Tony Haffer, a meteorologist with the National Weather Service (NWS) in Phoenix. “There’s just a whole bunch of different definitions.”

The meteorological definition seems straightforward enough: a drought occurs when less rain falls in a given time period than usual.

But location matters. Below average rainfall in Miami might still be greater than the average rainfall for Las Vegas. A drought can happen in the semi-arid conditions of the desert when the region sees even less rain than the normal limited amount of precipitation it usually gets. This has been the pattern in the Southwest for most years since the mid-90s.

The average annual precipitation for Phoenix, Arizona, is about 8 inches, but since 1995, the city’s rainfall has been more than 20 inches below normal, according to the NWS.

In the East, where rainfall is generally much more plentiful, drought comes quicker and is declared when rain hasn’t fallen for a few months.

“When it rains, from [the East’s] perspective, the drought is over,” Haffer, the co-chair of Arizona’s Drought Monitoring Technical Committee, said.

By contrast, South Florida is currently in the grip of a severe drought due to less-than-normal precipitation. The region would need an estimated six weeks of steady rain for water levels to return to normal, according to the region’s water management district.

This quick recovery doesn’t happen in the West, where after years of precipitation deficits , one wet event or even one wet winter won’t be enough for reservoirs and ecosystems to recover.

In the Southwest, even after rains, major reservoirs may not return to their full capacity. An El Niño event during the winter of 2004 brought some relief to the region, “but it still left the big lakes, Lake Powell and Lake Mead, well below normal, and so from a hydrological standpoint, the drought really didn’t end at that time. It just stopped getting worse,” said Kevin Trenberth of the National Center for Atmospheric Research (NCAR).

Because many urban areas in the Southwest, with the exception of Las Vegas, have multiple sources of water (from local reservoirs, the Colorado River and groundwater), residents sense that they are virtually immune to droughts.

“That redundancy of supply has gotten the major urban areas through a string of really dry years,” said Gregg Garfin of the University of Arizona, co-chair of Arizona’s Drought Monitoring Technical Committee.

But recent population booms in rural areas, where people often depend on a single source of water, are causing problematic shortages.

“You have this natural component, and then you have this human-induced component as well where you’re increasing the demand,” said Susan Craig of the Arizona Department of Water Resources.

Urban areas may be more in danger in the future if global warming exacerbates the dry conditions and reservoirs—the lifelines for Southwest residents—fall even lower.

And drop they may. Allotments of water from the Colorado River, a major source of water for many Western states, were made during the 1920s, one of the region’s wettest periods this century. So now there are more claims to the water than there is water to go around. So far not everyone has cashed in on those claims, but if overall water levels continue to drop, somebody's going to come up dry.

Water shortages will affect many areas of the United States and the world, leading to “water wars” between states and countries if global temperatures continue to rise throughout the next century, as predicted in reports issued by the Intergovernmental Panel on Climate Change..

Droughts will especially increase in subtropical areas, like the U.S. Southwest, Australia and parts of Africa and Europe, as Earth’s warming causes more evaporation and shifts weather patterns, pushing the paths of storms that bring thirst-quenching rains further north.

According to a recent study, over the coming century the Southwest will essentially transition into a state of “perpetual drought” due to the effects of global warming. This prediction leads to the questions of whether the worsening arid conditions of the Southwest should be called a drought or whether the regional climate is changing.

“The climate has changed and it’s become even a little more arid than it was,” said Trenberth, the NCAR researcher.

Other scientists disagree. According to Garfin, records of the region’s past climate show that multi-decade droughts have occurred many times before.

“I think the fact that we have multi-decade drought and that we’re in one now is not unusual, but maybe the character of [drought] is changing,” he said, referring to massive die-offs of trees and earlier snowmelts (which the parched soil can’t absorb, reducing a critical source of water supplies).

With the off-and-on droughts experienced in the past decade in the Southwest, Craig said that some people may weary of the term. At a recent local presentation, one audience member asked her, “When do we consider that we’re not in a drought, because we’re always in a drought?”

When others, especially in urban areas, hear repeated pronouncements of drought, they may not realize the full impact because they have not felt its pinch. For this reason, Craig said, it is important to educate the public not on exactly how drought is defined, but on what drought does.

“Maybe to some folks it doesn’t means as much when we keep saying it,” Craig said. “But I think if you focus on impacts, it doesn’t really matter what you say.”

Drought has no one meaning—it can be fit to specific places and situations. But no matter where it happens, what causes it or whether you’re tired of the topic altogether, in the coming century, some people will see less of one of our most precious natural resources—water.