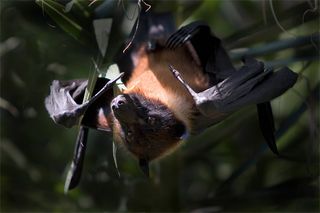 These are just a few of the scientific discoveries that are being honored tonight (Sept. 30) at the 2010 Ig Nobel Prizes presented here at Harvard University's Sanders Theater. The awards honor scientific achievements that "first make people laugh, and then make them think," according to an Ig Nobel release.

Winners traveled, at their own expense, from New Zealand, Japan, the Netherlands, Mexico, Italy, the United Kingdom and the United States to collect their prizes in person.

"Why not?" said winner Richard Stephens, a psychologist at England's Keele Unviersity, on his reasons for traveling across a pond to attend the ceremony. "I think it's a form of recognition. I had no qualms about saying yes."

Stephens won the 2010 Ig Nobel "Peace Prize" for proving that swearing relieves pain. Though he acknowledged the prizes are "a bit of a piss-take," he said it was an honor as well.

The ceremony this year was themed around bacteria. The event was a raucous two hours featuring opera singers performing bacteria-themed arias, two desigated occasions for throwing paper airplanes, and a "Win a Date With a Nobel Laureate" contest, where a member of the audience was randomly chosen to win a date with real Nobel prize winner William Lipscomb.

This year marks the 20th time the prizes have been awarded. Out of a pool of almost 7,000 nominations, a committee whittled down the list to 10 winners, said past honoree Kees Moeliker, who won in 2003 for discovering homosexual necrophilia in mallard ducks. Since winning the prize himself, Moeliker has become part of the Ig Nobel organization and helps choose the champions now.

Of the 10 victors, eight attended the ceremony, where they were permitted a maximum of 60 seconds each to deliver an acceptance speech. If the speeches went over time, an eight-year-old girl onstage would cry out, "Please stop, I'm bored."

Lianne Parkin, an epidemiologist at the Univeristy of Otago in New Zealand, won the physics prize for proving that wearing socks over shoes can stop people from slipping on icy hills.

"There was no good evidence to support this off-label use of socks," Parkin said in her acceptance speech. "So we undertook a randomized controlled trial."

The accolades were presented by five actual Nobel laureates - some wearing bacteria-shaped hats - in an event produced by the science humor magazine "Annals of Improbable Research."

"Scientists can take themselves way too seriously," said Karina Acevedo-Whitehouse of the Zoological Society of London, winner of the engineering award for figuring out how to use a helicopter with Petri dishes strapped to its front to collect samples of whale snot to study disease in the mammals.

She said the awards were a good chance to loosen up and share the lighthearted elements of research with the public.

Acevedo-Whitehouse and her co-researchers, Agnes Rocha-Gosselin, also of the Zoological Society, and Diane Gendron of the Instituto Politecnico Nacional in Mexico, said they were bemused the research was being honored for the novel helicopter method, since the main project involves investigating serious health questions in marine biology. But they were glad of the recognition, nonetheless.

"Most of the time science is just ignored by normal people, and it's really sad," Gendron told LiveScience, saying this was a nice chance to reach out to non-scientists, especially children.

Before learning they were chosen for the awards, many winners admitted ignorance about the Ig Nobels.

"At first we thought it was a joke – we didn't believe it," said Ilja van Beest of Tilburg University in the Netherlands, who won the medicine prize for discovering that asthmatics feel relief after riding roller coasters. But after a little Googling, he and his co-researcher, Simon Rietveld of the University of Amsterdam, decided to travel in person to accept their awards.

The two scientists said they were excited to meet the other nominees and have fun.

Other winners included a team that used slime mold to design the most efficient railroad tracks, researchers who demonstrated that businesses would be more efficient if they promoted people at random, and scientists who determined that microbes cling to men's beards.

Despite the lighthearted nature of the awards, all discoveries are legitimate research findings that have been published in scientific journals.

"There's nothing funny about what we're doing," said Eric Adams of MIT, who won the chemistry award for finding that oil and water do mix, after all. His research investigates how oil behaves during oil spills.

Though the topic is serious, he acknowledged how the finding boiled down to an amusing description, especially when the Ig Nobel committee decided to award the prize to the BP Corporation as well for its contribution to oil spill knowledge in the wake of the disastrous Gulf oil spill.

The honorees in the economics category – the executives of Goldman Sachs, AIG, Lehman Brothers, Bear Sterns, Merrill Lynch, and Magnetar – who were being honored for "creating and promoting new ways to invest money – ways that maximize financial gain and minimize financial risk for the world economy, or a portion thereof" declined to accept in person.