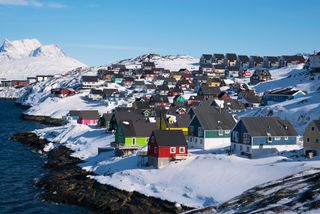 President Donald Trump has expressed an interest in buying Greenland, an autonomous Danish territory, according to a report published yesterday (Aug. 15) by The Wall Street Journal.

Why does Trump want the United States to buy the world's biggest island? The reason, in large part, is likely that Greenland is rich in natural resources, including iron ore, lead, zinc, diamonds, gold, rare-earth elements, uranium and oil, according to the Brookings Institution, a nonprofit public-policy organization in Washington, D.C.

Not only does Greenland boast these resources, but more are being exposed there as the Earth warms due to human-caused climate change.

Extracting Greenland's natural resources, however, isn't a straightforward enterprise. Much of the mining and drilling depends on global supply and demand, not to mention navigating Greenland's severe climate and terrain. For instance, oil production probably won't take place for at least another decade, according to the Brookings Institution's 2014 report, because "the conditions in Greenland are very harsh and technically demanding and the costs of extraction high."

Mining projects show more promise. The Greenland government has endeavored to create environmental and regulatory safeguards while, at the same time, attracting investors, according to the report. The Canadian company AEX Gold is already mining the precious metal in the Nanortalik Gold Belt in southern Greenland, according to Mining Global, a mining news outlet. And New York-based Greenland Ruby A/S opened its ruby and pink-sapphire mining operation in Aappaluttoq, in southwest Greenland, in 2017.

But buying Greenland itself would also come with a hefty cost. The territory, home to more than 57,000 people as of 2018, relies on Denmark for two-thirds of its budget revenue, and it also has high rates of suicide, alcoholism and unemployment, according to the BBC. Such problems would benefit from investments from social and government service programs.

What's more, politicians in Greenland and Denmark don't seem eager to sell. In a tweet posted this morning (Aug. 16), Greenland's Ministry of Foreign Affairs said, "#Greenland is rich in valuable resources such as minerals, the purest water and ice, fish stocks, seafood, renewable energy and is a new frontier for adventure tourism. We're open for business, not for sale."

#Greenland is rich in valuable resources such as minerals, the purest water and ice, fish stocks, seafood, renewable energy and is a new frontier for adventure tourism. We're open for business, not for sale❄️🗻🐳🦐🇬🇱 learn more about Greenland on: https://t.co/WulOi3beICAugust 16, 2019

Similarly, Rasmus Jarlov, a conservative member of the Danish parliament, tweeted, "Out of all things that are not going to happen, this is the most unlikely. Forget it."

Out of all things that are not going to happen this is the most unlikely. Forget it. https://t.co/0ChJvOVJW7August 15, 2019

This isn't the first time the United States has expressed an interest in purchasing Greenland. The territory is located in a strategic spot, just below the Arctic Ocean, between Canada and Europe. President Andrew Jackson's administration (1829-1837) floated the idea of buying the island, as did an 1867 report by the U.S. State Department, the BBC said. President Harry Truman even offered Denmark $100 million for Greenland in 1946, though nothing came of the proposal.

During the Cold War, the U.S. built several military sites on Greenland, the BBC reported. However, these sites contain leftover toxic nuclear waste, which is now being exposed as the island's ice melts away.