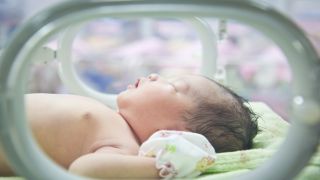 Neuroblastoma is most commonly diagnosed in infants and young children under the age of 5.
(Image: © Shutterstock)

Neuroblastoma is a rare type of cancerous tumor that's most commonly diagnosed in infants and children under age 5. It is extremely rare in people over age 10.

Neuroblastoma is the most common type of solid cancerous tumor, other than brain tumors, found in children, said Dr. Alison Friedmann, a pediatric oncologist at MassGeneral Hospital for Children in Boston.

About 800 new cases of neuroblastoma are diagnosed each year in the United States, according to the American Cancer Society. It accounts for about 6% of all childhood cancers, and it's the most common tumor in infants.

The cancer begins in the early forms of nerve cells called neuroblasts. As a fetus develops, most neuroblasts grow and eventually become mature nerve cells, either before birth or in a baby's first few months of life, according to the American Childhood Cancer Organization. But in neuroblastoma, the neuroblasts don't develop correctly. Instead of becoming mature nerve cells, they continue to grow and divide. Sometimes, these abnormal neuroblasts die off during infancy; however, in rare instances, abnormal cells can accumulate and develop into tumors.

There is some evidence that neuroblastoma may be a normal stage of development in the fetus, but most of the time, the tumor regresses on its own without needing treatment, Friedmann said. Scientists don't really know why early nerve cells turn into cancer in some children and not in most children, she said. Some experts suspect it's due to a genetic mutation inside nerve cells, according to the American Cancer Society.

Neuroblastoma can form almost anywhere in the body, but the most common site is the tissues of the adrenal glands, located on top of the kidneys, Friedmann said. The tumor can also develop in nerve cells destined to become part of the sympathetic nervous system, such as locations along the spine, neck, chest, abdomen or pelvis, she said. Neuroblastoma cancer cells can also spread to other parts of the body, such as the lymph nodes, liver, bones, bone marrow and skin.

Age is the primary risk factor for neuroblastoma, as the cancer is typically diagnosed in children under 5. Another risk factor is heredity, but only 1% to 2% of neuroblastomas are caused by an inherited alteration in a gene. In most cases, a cause is never identified, according to the Mayo Clinic.

Neuroblastoma is usually discovered when a parent or doctor feels or notices an unusual lump somewhere on the child’s body — most often in the belly, but possibly the neck, chest or elsewhere. The tumor may become visible through the skin, or it could press on neighboring organs, which could cause other symptoms.

According to the Dana-Farber Cancer Institute at Boston Children's Hospital, symptoms of neuroblastoma may include a noticeable abdominal mass, enlarged lymph nodes, weakness, poor appetite, diarrhea or abnormal blood pressure, among others. But symptoms can vary widely, depending on the tumor's size and location, as well as whether the cancer has spread.

Abnormal nerve cells may be present before birth, but a diagnosis of neuroblastoma may not be made until childhood, when cells begin to multiply rapidly and form a tumor that presses on nearby tissues, according to the Dana-Farber Cancer Institute.

In rare cases, neuroblastoma may be detected by a prenatal ultrasound, which might show an adrenal or abdominal mass in the fetus, Friedmann told Live Science.

To make a diagnosis, doctors often use urine tests; imaging tests, such as computed tomography (CT) scanning or magnetic resonance imaging (MRI); and, ultimately, a biopsy, Friedmann said. Urine tests may allow doctors to detect proteins secreted by the tumors, and imaging can reveal a mass suggestive of a tumor. Then, a biopsy allows tissue to be examined closely under a microscope to reveal whether cancer cells are present.

Related: Will there ever be a universal test to detect cancer?

These tests, along with other scans, can pinpoint the size and location of the tumor and determine how far the cancer has spread — a process called staging. Staging is also used to determine how serious the cancer is and how best to treat it, according to the American Cancer Society. In about two-thirds of cases, the cancer has already spread to the lymph nodes or bones by the time neuroblastoma is diagnosed.

Diagnosing neuroblastoma also involves determining a child's risk group, which is divided into three categories: low, intermediate and high risk. Risk groups provide a picture of how well the cancer may respond to treatment and can suggest possible survival rates. Patients in the low-risk category typically have the highest chance of survival.

Treatment is based on a child's age, characteristics of the tumor and whether the cancer has spread.

Some infants and young children with neuroblastoma may have no symptoms, and these patients are considered low-risk. The mass may have only been noticed during tests to find other childhood diseases, and it may go away on its own or mature into normal cells without any treatment, Friedmann said. Other times, surgery to remove the tumor is the only required treatment, she said.

Intermediate-risk patients generally require surgery to remove as much of the tumor as possible, followed by a moderate course of chemotherapy, which can destroy any remaining cancer cells and prevent the cancer from spreading, Friedmann said.

High-risk patients with the most aggressive form of the disease need high-dose chemotherapy to kill cancer cells. Treatment also involves a combination of therapies, including another course of chemotherapy and a stem cell transplant, followed by surgery to remove visible tumors, radiation and immunotherapies, Friedmann said.

A stem cell transplant can help the body replace bone marrow that has been damaged during chemotherapy; immunotherapies can boost the body's ability to find and destroy cancer cells on its own; and radiation may prevent cancer recurrence, according to the American Childhood Cancer Organization.

Children with high-risk tumors may develop health problems months or years after cancer treatment has ended, which are called "late effects." These side effects from cancer treatment may include growth and development problems, hearing loss, reproductive dysfunction, hormonal deficiencies, such as thyroid problems, and second cancers, Friedmann said.

This article is for informational purposes only, and is not meant to provide medical advice.