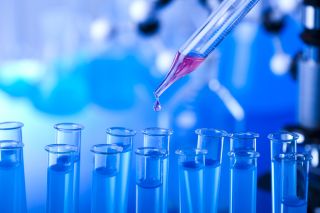 But that doesn't mean scientists aren't trying: If researchers can find a unique signature or "biomarker" of cancer — meaning a characteristic that all cancerous cells share but healthy cells do not — they may be able to create a simple test to detect it.

One unique cancer biomarker could be DNA.

Of course, DNA isn't something that's unique to cancer cells — every cell in the body has it. But according to a team of researchers from Australia, cancer DNA takes on a different structure than healthy DNA, and that's something scientists could target. [7 Diseases You Can Learn About from a Genetic Test]

That was the premise of a paper that the team published last December in Nature Communications. They found that because of its unique shape, DNA from cancer cells bound tightly to gold nanoparticles, whereas the DNA from healthy cells did not.

Matt Trau, a professor at the University of Queensland's Australian Institute for Bioengineering and Nanotechnology and the senior author on the Nature paper, discussed those findings at a presentation March 31 here at the annual meeting of the American Association for Cancer Research (AACR).

To illustrate how cancer DNA acted differently, Trau held up some "DNA" — one of his daughter's toys, a long, colorful train of little plastic pieces linked together. This is how DNA would look once you take it from people's cells, purify it and start to examine it in the lab, Trau said.

But it's not how DNA looks when it's circulating around in people's blood. To illustrate that, Trau crumbled up the toy.

This knotted tangle of DNA, which crumples up differently when it comes from cancer cells than when comes from normal cells, is now the target for the team's cancer tests.

In the December study, the researchers said that they were able to achieve a 90 percent accuracy rate in detecting cancer — at least the types of cancer that they tested — in 10 minutes' time using gold nanoparticles. That means that the test successfully detected cancer in 90 percent of the samples used (all of which contained cancer DNA).

Robert Kovelman, a senior director at Biological Dynamics, a San Diego-based biotech company, who was not a part of the study but attended the talk, said that the technology Trau described is "very exciting … and it certainly has potential."

However, "I think it's still in its early days … ultimately, it's a question of how [the technology] will be applied," Kovelman told Live Science.

The key metric for a universal biomarker test will be that it can detect cancer at its early stages, before symptoms begin, Kovelman added. Trau and his team haven't yet tested their approach on detecting the earliest stages of cancer, when there wouldn’t be a lot of cancer DNA circulating in the blood.

Tests that detect cancer in its early stages do already exist, of course — there are screenings for common cancers such as colorectal and breast cancers.

"The difficulty is when it's a rare cancer, you're never going to have a population screening, because it's simply uneconomical," said Viive Howell, an associate professor at the University of Sydney School of Medicine, who was not a part of Trau's research. [The 10 Deadliest Cancers and Why There's No Cure]

And then there are the cancers that are simply difficult to detect.

Take brain cancer, for example. The only thing that can be done to detect this cancer is to monitor for symptoms or take an MRI, which is very expensive and not something that would be done as a screening, Howell told Live Science.

And because the brain is protected by the blood-brain barrier, which prevents most compounds in blood from flowing into or out of the brain, cancer DNA rarely exits the brain into the bloodstream, Howell said. That means it would be really difficult to detect brain cancer through a blood test.

Trau and his group have tested their methodology on a variety of cancers, but none of them were particularly "rare" cancers or those that are hard to detect in the first place. Howell said that she's not sure if their method would work for such cancers.

But, "if you can detect something early by something nonspecific that doesn't discriminate against rare cancers such as brain cancer, pancreatic cancer and ovarian cancer … then that would be amazing," she added.

Trau's team is working on several other potential cancer biomarkers, such as those involved in different protein pathways. The reason is because "no marker is perfect," said Trau. "You get a lot of bang for your buck if you use multiple markers to mitigate its potential weaknesses."

Other labs around the world are also taking a crack at this.

Shiran Shapira and Dr. Nadir Arber, researchers at Tel Aviv University in Israel who were not part of Trau's study, are working to develop a blood test that might be able to detect multiple types of cancer, based on differences in proteins found on the surface of the cancer cell.

Arber told Live Science that there's still a long way to go before reaching a truly universal biomarker. There are many factors to consider, such as how these cancer cells look in different genders and age groups or even after taking medication, he said.

During the talk, Arber also raised a question about inflammation: Because some of the pathways that lead to cancer are also involved in inflammation, how do you know the tool can accurately distinguish between the two?

Others raised a point about age: Some of the structural changes to healthy DNA that occur with age can look similar to what happens to cancer DNA.

Trau told Live Science that the team tested for the effects of aging in their research. Though there are a few signals that come from the aging process, approximately 90 percent seems to come from the cancerous process, he said. As for inflammation, "my suspicion is that it's probably not going to be an issue," he said. "If it was an inflammation signal, then it would have knocked down our accuracy much earlier."

But these are all things he wants to thoroughly test, he added. "It's still early days."