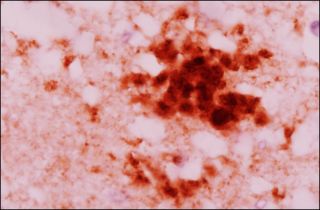 The brain tissue of a person with variant Creutzfeldt-Jakob disease. The dark red splotches are the prions.
(Image: © Raphael GAILLARDE/Gamma-Rapho/Getty Images)

But if someone is exposed to prions, how do the infectious proteins make their way to the brain?

A new study finds that, surprisingly, prions that have gotten into the blood don't appear to spread to the brain using one suspected route — that is, by crossing the blood-brain barrier, the network of blood vessels that serves as a filter into the brain. [10 Things You Didn't Know About the Brain]

The findings, published today (Nov. 29) in the journal PLOS Pathogens, add to the existing evidence that prions likely reach the brain through another route — by traveling along nerves — similar to the way herpesviruses and the rabies virus can invade the brain.

The research might one day lead to the development of treatments to prevent prions from spreading to the brain, even after a person has been exposed to the dangerous proteins through an oral or blood route, the study authors said.

Prion diseases lead to progressively worsening symptoms, including changes in memory, personality and behavior; declines in cognitive function; and difficulty with coordination, according to the National Institutes of Health. There is no cure for these diseases, and they are typically fatal within months to years.

Although the spread of prion diseases is extremely rare, there have been some notable cases. In the United Kingdom, there were nearly 200 cases of a prion disease, called variant Creutzfeldt-Jakob disease, tied to people eating contaminated beef in the 1980s and 1990s. In cattle, the condition is sometimes known as mad cow disease.

In addition, a few hundred people around the world developed Creutzfeldt-Jakob disease when they received contaminated growth-hormone treatments during the 1950s through 1980s.

In the new study, the researchers from the University Hospital Zurich in Switzerland used genetically modified mice with a highly permeable blood-brain barrier, which means that substances could cross this barrier rather easily.

The researchers found that these mice did not develop the disease any faster than mice with normal blood-brain barriers. After the researchers infected the mice's blood with prions, both groups of mice took about the same amount of time to show symptoms and had similar death rates.

"These results suggest that passage of prions through the blood-brain barrier may not be relevant to the development of disease," and that effective treatments should aim to stop the spread of prions, the researchers said.