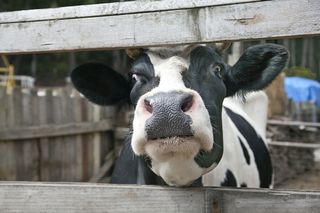 Stock photo of a healthy cow. Inspectors determined that an Alabama cow recently diagnosed with an atypical strain of mad cow disease did not pose a health threat to humans.
(Image: © Vincent Noel/Shutterstock)

There are two types of BSE — classical and atypical — and the cow was diagnosed with atypical BSE, which is rare and arises spontaneously in older animals, U.S. Department of Agriculture (USDA) representatives announced July 18 in a statement.

Officials with the Alabama Department of Agriculture and Industries (ADAI) detected evidence of the disease during a routine inspection of the cow's body after it died at a livestock market. The inspectors said that the cow did not pose any threat to human health, nor was there a risk that other animals might be infected, ADAI representatives said. [Top 10 Mysterious Diseases]

BSE is a progressive disease that damages cows' nervous systems; symptoms include uncoordinated or clumsy movement and unusually nervous or violent behavior. The disorder is diagnosed by examining brain tissue under a microscope after the animal's death — the brains of infected cows appear spongy, according to the Food and Drug Administration (FDA).

It is unknown how cows become sick with atypical BSE, but cows usually contract classical BSE by eating feed that contains bovine by-products — such as bone meal — that originated in a cow that had the disease. The disease is caused by an infectious protein called a prion. Once a cow is infected, the prions may lurk quietly for four to six years before the animal shows any symptoms.

Mad cow disease is not transmissable between animals, but there is no vaccine and no cure, according to the FDA.

People who eat infected cows can contract a variant of BSE known as Creutzfeldt-Jakob disease (CJD), but this illness is not widespread — even in the United Kingdom, where mad cow disease has infected more than 1 million cows, only 227 people have been diagnosed with CJD since 1996, and the risk to people in the U.S. is "extremely low," the Centers for Disease Control and Prevention (CDC) says.

The cow that died in Alabama from the atypical version of BSE did not contract it from contaminated feed, officials said. In fact, the use in animal feed of protein from any mammal has been prohibited in the U.S. since 1997, and high-risk tissue was banned from animal feed use in 2009, USDA representatives said in the statement.

This is the fifth cow with BSE identified in the United States since 1993, according to the CDC.