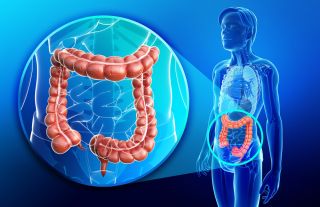 The large intestine, also called the colon, is part of the final stages of digestion. It is a large tube that escorts waste from the body.
(Image: © S K Chavan | Shutterstock)

Colorectal cancer is the third most commonly diagnosed cancer in the United States, but with timely screenings, it is also one of the most preventable, according to the American Cancer Society (ACS). A colorectal-cancer screening can usually detect precancerous polyps, and these growths can then be removed during a colonoscopy long before they become malignant.

"This is a cancer people don't need to die from," said Dr. Andrew Wolf, an oncologist and an associate professor of medicine at the University of Virginia School of Medicine. "It's a very screenable disease."

The two main types of colorectal-cancer screenings are a colonoscopy and a stool-based test. A colonoscopy uses imaging technology to provide pictures of the colon's inner wall. With a stool test, lab technicians examine a stool sample for signs of disease.

What is colorectal cancer?

Cancer is an abnormal growth of cells that invade healthy tissue. Cancer cells can form tumors in the areas where they originate, and they can spread to other parts of the body and grow there, according to the ACS. Colorectal cancer usually begins as a polyp in the wall of the colon or the rectum. Depending on where the cancer starts, it may be called colon cancer or rectal cancer.

Polyps can be bulb-shaped or flat. Not all polyps become cancerous, but certain types are more likely to turn into cancer. There are two main types of colorectal polyps, according to the ACS:

Diet and lifestyle may also play roles. Western diets that contain too much red meat and saturated fat may boost the risk of colorectal cancer, said Dr. Mark Friedman, a gastroenterologist with Moffitt Cancer Center in Tampa, Florida. In countries such as Japan, where the standard diet doesn't include as much red meat, the risk of colon cancer is lower, according to the World Cancer Research Fund International.

The risk of developing colorectal cancer for people ages 45 to 49 is about the same as for people ages 50 to 54, according to research by the American Cancer Society, which used to recommend screenings start at age 50.

"Poor diet and dramatic increases in obesity and type 2 diabetes rates may be partly responsible for the rise in younger colorectal cancer cases, but there may be other factors," Friedman told Live Science. "There may be a link to obesity, a more sedentary lifestyle and worsening dietary habits. There is an increase in insulin resistance and metabolic syndrome, and we think there may be a link there, too."

The size and number of polyps may also indicate a greater likelihood of cancer development. If a polyp larger than 1 centimeter (0.4 inches) is found or if more than two polyps are found, the odds of colorectal cancer are higher, according to the American Cancer Society. Also, when a polyp is removed, if the interior of the polyp or the lining of the colon or rectum reveals dysplasia — a collection of cells that look abnormal but not like actual cancer cells — the condition is considered precancerous.

When should you get screened?

The best way to find and remove polyps is with a colonoscopy, Friedman said. "According to the GI [gastrointestinal] societies, colonoscopy is still the gold standard test for colon cancer screening," Friedman told Live Science. "I like colonoscopy because it is a preventative test. It can detect and remove polyps before they turn into cancer."

Visual or structural examinations of the colon and rectum include a colonoscopy, which the ACS recommends people 45 and older have every 10 years. However, factors such as a family history of colon cancer or the discovery of precancerous polyps in previous screenings may cause your doctor to recommend more frequent screenings, such as every three or five years.

Instead of a standard colonoscopy, some people opt for a "virtual colonoscopy," also known as computed tomography (CT) colonography. Unlike a traditional colonoscopy, which usually involves light or deep sedation, a CT colonography requires no anesthesia. It can also be done in less time. With light sedation, the patient is extremely relaxed, but can converse with healthcare providers and remember the colonoscopy, while deep sedation is a form of sleep in which the patient will have no recollection of the procedure.

One of the main differences between the two screenings is that a CT colonography is a noninvasive procedure. During a colonoscopy, a doctor inserts a long, thin, flexible tube (called a catheter) into the rectum and colon. At the end of the catheter is a tiny camera called a colonoscope, which gives the doctor a detailed view of the lining of the rectum and colon. The colonoscope can also remove most types of polyps it discovers. With a CT colonography, a doctor uses a special type of X-ray equipment to get pictures of the colon and rectum from outside the body. This virtual colonoscopy is not as effective at locating all types of polyps, Friedman said. And if polyps are found, a standard colonoscopy will be necessary to remove them.

A colonoscopy is not the only colorectal-cancer screening available. There are also stool-based tests, in which the patient provides a stool sample to a laboratory for analysis. In some cases, a sample can be provided directly to a lab in the patient's community. Other times, the patient is given a kit for collecting the sample, which is then mailed to a lab.

Although stool-based tests can be appropriate for some people, there are some drawbacks.

As with CT colonography, if a stool-based test is positive for markers of disease, then a colonoscopy is recommended to find and remove polyps.

However, people who are physically very frail or may not tolerate the sedation well may be advised to use the stool-based test or the CT colonography.

Previous guidelines didn't address the appropriateness of colonoscopies for older adults. The new ACS guidelines recommend screenings through age 75. For people ages 76 to 85, decisions about screening should be made on an individual basis. Some considerations for screening older adults include the following:

As with many other health problems, the risk of colorectal cancer increases with age. "There is rather robust evidence that screening up to age 75 makes sense," Wolf told Live Science. "From 75 to 85, the evidence isn't as strong. People in this age group often gather other life-limiting illnesses, which we call co-morbidities. If someone has co-morbidities, it might be reasonable to discontinue screenings. By age 85, it doesn't make much sense to continue screening."

And some people may benefit from colorectal-cancer screenings prior to age 45. A strong family history of colorectal cancer and other risk factors, such as obesity, could make someone a good candidate for an early colonoscopy.

While there are basically no risks associated with stool-based screening, a colonoscopy does carry some potential dangers. The biggest concern is bleeding. When there is a bleeding problem, it's usually related to the removal of a polyp or to perforation of the lining in the rectum or colon. These injuries are usually minor and treated at the time they occur, according to the American Society for Gastrointestinal Endoscopy.

Again, a patient's age may determine whether the risks of having a colonoscopy outweigh the benefits. "The risks associated with colonoscopies go up with age, and we don't take that lightly when advising patients," said Wolf, who helped write the ACS' 2018 guidelines. "The trade-off is the lives saved versus the risk of more colonoscopies."

Wolf noted that, as with all procedures that require anesthesia, a colonoscopy does come with a very slight risk of some respiratory or cardiac complications.

Though colonoscopies are generally safe and well tolerated, they are also viewed as a particularly unpleasant screening because of the preparation required. The prep usually includes a clear liquid diet the day before the procedure and the consumption of a strong liquid laxative the night before to clear out the colon so that the wall and any polyps can be easily seen during the actual procedure.

However, Friedman said people shouldn't let that prep deter them from getting screened.

"It's a painless test during which the patient is sleeping," Friedman said. "There is no reason to feel embarrassed or dread it. And it can be lifesaving. Patients are willing to get mammograms, prostate exams, PAP smears — so why not this? This is just another very important test to ensure long-term health. And it's important for men or women of all races. So don't think you are exempt."

Though the new guidelines suggest that there may be a risk of developing colorectal cancer prior to age 50, Wolf said he hopes the ACS guideline changes will get people thinking about getting screened soon, even if they've passed their 45th birthday.

"More than half of the people who should be getting screened aren't having it done," Wolf said. "Even if they aren't going to start at age 45, they really need to get on board by age 50."