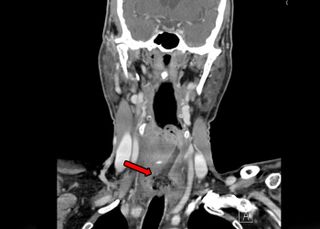 A man ate a Mother's Day cupcake so fast, he accidentally swallowed the 2-inch (5 centimeters) cupcake topper. Above, a CT scan showing the topper stuck in the man's esophagus, as indicated by the red arrow.
(Image: © Reprinted with permission of Elsevier (2019))

Scarfing down a cupcake left one man with more than a sugar high. He downed a Mother's Day dessert so fast he failed to notice that he had swallowed the 2-inch (5 centimeters) cupcake topper.

The topper, which read "Happy Mother's Day," was lodged in his throat for a week before doctors discovered it, according to a new report of the case.

The 60-year-old man went to the emergency room (ER) after he developed a sore throat, fever, difficulty swallowing and a feeling that something was stuck in his throat, according to the report, published Oct. 10 in The Journal of Emergency Medicine. The man told doctors his symptoms had started about a week prior to his ER visit, after he hurriedly ate a cupcake on Mother's Day, the authors, from The Johns Hopkins University School of Medicine, wrote in the report.

The man had previously visited a different ER for his throat discomfort, but he was discharged after an X-ray of his neck showed no abnormalities.

But at Johns Hopkins, doctors ordered a CT scan, which showed "a 5-cm foreign body" in his esophagus, they wrote.

The man underwent an upper endoscopy, a procedure in which doctors use a thin, flexible tube with a camera to look in the esophagus.

Doctors saw a "pink foreign body" covered in food debris that had caused a small tear in the man's esophagus, the report said. During the endoscopy, doctors repaired the tear and removed the foreign body, which they discovered was a plastic cupcake topper.

ER doctors commonly see patients who have swallowed foreign bodies. However, in most cases, the foreign object passes out of the body on its own — fewer than 20% of cases require removal by doctors, the report said.

When a foreign body gets stuck in the throat, a tear in the esophagus is a concerning complication — in serious cases, it can result in death in up to 18% of patients, the report said.

X-rays are often the first imaging tests ordered in cases like this one, but the test may miss objects such as plastic and glass, which was the case for this patient.

The man was hospitalized for four days due to persistent difficulty with swallowing; but by the time he was released, he was able to resume a normal diet, the report said.