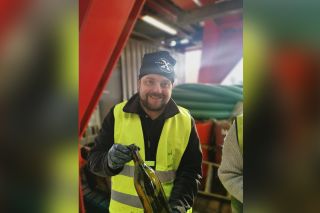 Peter Lindberg from the Swedish dive team Ocean X, with one of the hundreds of bottles recovered from the wreck of the Kyros.
(Image: © Ocean X)

Hundreds of bottles of cognac and Benedictine liqueur have been salvaged from a ship sunk by a German U-boat in the Baltic Sea in 1917.

Scientists suspect the bottles were part of one of the last cargos of luxuries en route to the high-living aristocracy of Russia — and perhaps for the czar of Russia himself, Nicholas II, who was executed with his family by the Communist government in 1918.

"This was the last shipment for Russia, and for the czar," said Peter Lindberg, the founder of the Swedish dive team Ocean X, who led the salvage effort.

The bottles of cognac brandy and Benedictine — an herbal liqueur — were brought to the surface from the wreck of a Swedish steamer called the Kyros that sunk in the Sea of Aland, part of the Baltic Sea between Sweden and Finland.

The dark and cold waters of the Baltic provide excellent conditions for storing spirits, and Lindberg hopes that tests will show many of the 900 or so bottles they collected, including 50 cases of cognac and 15 cases of Benedictine, are still drinkable — and that they will fetch a high price at auction.

Some of the bottles have had their corks pushed in by the high water pressure, and some are filled with sediment. But many are still intact and some of the cognac bottles are still sealed with a thin layer of tin, he said.

Although Sweden was a neutral country throughout World War I, Germany was at war with Russia in 1917 — and the German navy had orders to sink foreign ships that carried war supplies into Russian ports.

Kyros' cargo manifest shows the steamer was carrying about 2 tons of spirits, Lindberg said, but it was also carrying steel and machine parts that could have helped the Russian war effort.

Related: Mayday! 17 Mysterious Shipwrecks You Can See on Google Earth

The Kyros was stopped at sea and inspected by a German U-boat in the Sea of Aland in on May 19, 1917 — and the U-boat commander decided to sink the ship with an explosive charge. The crew of the Kyros were first taken on board another ship, however, and eventually returned to Sweden.

Ocean X first discovered the wreck of the Kyros in 1999, Lindberg told Live Science, under about 250 feet (77 meters) of water; but its exact location was lost again before it was recently discovered.

Divers from Ocean X started diving on the wreck of the Kyros a few years ago, but stopped because it was covered with abandoned fishing nets. They then decided to recover the bottles using a salvage ship equipped with two remotely operated underwater vehicles (ROVs), although the recovery work was much harder than usual because of very poor visibility, he said.

The wreck and its cargo are under international maritime rules of salvage — so whoever recovers anything can keep it.

In 1997, Lindberg and Ocean X found a different shipwreck in the Baltic containing almost 3,000 bottles of Champagne bound for Russia.

They were able to salvage around 2,000 bottles from that wreck, some of which were sold at auctions for between $5,000 and $10,000 a bottle, and sometimes for much more, Lindberg said. "The prices vary up and down."

According to some estimates, the new haul could be worth millions of dollars.

But while the Benedictine brand is now owned by Bacardi, the cognac brand — "De Haartman & Co." — is no longer made. "I don't know yet if the collectors would like to buy vintage cognac of a known brand, or is it worth more or less because it is unknown?" Lindberg said.

Between the Champagne wreck and the Kyros wreck, Ocean X has now recovered all the spirits known to lie on the seafloor of the Baltic, Lindberg said. "This was the last shipment to find."

The team will now turn its attention to its other projects in the region, he said — including a sea hunt for some of Nicholas II's jeweled "Faberge eggs" and further investigation of the so-called "Baltic anomaly" — a submerged, roughly circular structure they found in 2012 that could be a glacial deposit, Live Science previously reported.

"This summer, we found new strange things out there, which make us believe that it might have been a very early settlement," Lindberg said.