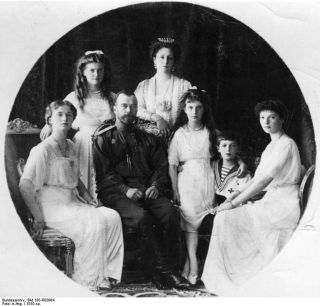 Confusion reigned for 90 years about a possible surviving daughter of Czar Nicholas II, the last Imperial ruler of Russia. Now a public report reveals how modern investigators established that neither Anastasia nor the czar's other children found a fairy tale ending.

DNA analysis linked a known grave for most of the murdered Romanov family with two human remains found in 2007. Russian authorities confirmed the discovered bodies as the last missing children in mid-2008, after getting results from labs in Russia and the U.S.

"I was requested to do the study," said Evgeny Rogaev, a molecular geneticist at the University of Massachusetts lab who took the lead on the scientific investigation. "It's a difficult case."

The report's final evidence was published online last week in the journal Proceedings of the National Academy of Sciences.

A gruesome find in the mountains

Bolsheviks killed Czar Nicholas II, Empress Alexandra and their five children in 1918 as Russia plunged into bitter civil war. Most of the Romanovs and several servants ended up in an unmarked grave near Yekaterinburg in the Ural Mountains, 900 miles east of Moscow.

A small horror awaited the discovery team. The killers had tried to disfigure the bodies with both fire and sulfuric acid, possibly to conceal the victims' identities or condition at time of death. That made for a very tricky job when the Russian Prosecutor-General's office called on Rogaev to help solve the case.

"The problem was the bones from the second grave, because the quality was very bad from most of the samples," Rogaev told LiveScience. "We just selected a few that could give us some results."

Rogaev had previously applied his skills to forensic science in 1997, when a Russian government asked him to verify the identities of Czar Nicholas II and his family from the first grave. Now he had an even greater scientific arsenal to help establish the final fates of all the Romanov children.

One piece of evidence came from mitochondrial DNA. Unlike the more familiar autosomal DNA, which people inherit as a jumbled recombination of genetic material from both parents, mitochondrial DNA is only passed down from mothers to children. That provided a maternal lineage which Rogaev and other researchers used to identify the Romanov children through the late Empress Alexandra.

Forensic investigators previously relied on short sequence matches using mitochondrial DNA in the 1990s, but Rogaev used the latest technological advances to put together a complete analysis of the mitochondrial genomes belonging to the Imperial family.

"It's not just 200-400 base pairs [building blocks of DNA molecules], but 16,500 or more base pairs," Rogaev noted. "It's like comparing just having sentences to having all the chapters of a book."

Living and the dead

Another key connection came through the male Y chromosomes of the Romanov line. Examination of the bones from the second site turned up one male and one female, which meant that the lab could compare the Y-chromosome markers from the supposed body of Crown Prince Alexei with those of Czar Nicholas II.

"If everything was as we expected, the Y chromosome profiles should match," Rogaev said. "And they did."

But a final piece of the puzzle arose from an unexpected source – a bloodstained shirt belonging to Czar Nicholas II, carefully preserved in a museum.

Nicholas II survived an assassination attempt during a visit to Osaka, Japan, in 1891, while he was still Russian heir to the throne. His bloodstained shirt ended up as a historical relic in the State Hermitage Museum in St. Petersburg, Russia.

Rogaev did not expect much from the blood stain, given that almost a century's worth of exposure to ultraviolet light and various temperature conditions should have destroyed much of the DNA.

"Certainly we did not count on this," Rogaev said. "But surprisingly we got very good DNA profiles, so the estimates of probability for the identification of the remains of Nicholas II are extremely high."

Confirmation of the father's identity allows researchers to firmly say that the second site contains the bodies of Crown Prince Alexei and one of his older sisters. Forensic scientists say that the sister was likely Maria, although some initially thought it could be Anastasia.

Russian authorities have yet to decide what to do with these final remains of the Romanov dynasty. But the other members of the Imperial family were finally laid to rest in the Cathedral of Saints Peter and Paul in St. Petersburg in 1998.